Over at Financial Crisis and Recession, Susan Woodward and Robert Hall start a recent post, titled "The Fed contracts," with this:

"The Fed has indicated that it plans to pursue a policy of quantitative easing, that is, expanding its portfolio by borrowing in financial markets at low rates and investing the proceeds in higher-yielding private investments…

"But... the Fed has engaged in quantitative tightening over the past month, reducing its borrowing and reducing its holding of higher-yielding investments…. So far, no explanation for the Fed's announcements of moving in an expansionary direction while actually contracting."

First, it is probably appropriate to point out that the use of the term "quantitative easing" is a bit out of synch with the policy approach embraced by "the Fed." This is from Chairman Bernanke's January 13 Stamp Lecture at the London School of Economics:

"The Federal Reserve's approach to supporting credit markets is conceptually distinct from quantitative easing (QE), the policy approach used by the Bank of Japan from 2001 to 2006. Our approach—which could be described as 'credit easing'—resembles quantitative easing in one respect: It involves an expansion of the central bank's balance sheet. However, in a pure QE regime, the focus of policy is the quantity of bank reserves, which are liabilities of the central bank; the composition of loans and securities on the asset side of the central bank's balance sheet is incidental… In contrast, the Federal Reserve's credit easing approach focuses on the mix of loans and securities that it holds and on how this composition of assets affects credit conditions for households and businesses."

At Economist's View, Tim Duy zeroed right in on the point:

"Woodward and Hall are confused because they do not recognize that the Fed has not initiated a policy of quantitative easing…because the Fed sees their actions as credit market related, they would have no problem with the balance sheet contracting if credit market conditions dictate."

What Woodward and Hall describe is credit easing in the Bernanke lexicon, as "expanding its portfolio by borrowing in financial markets at low rates and investing the proceeds in higher-yielding private investments" is a description of changes in the composition of Federal Reserve assets. But the intent they assume is that of quantitative easing—which in the end is all about expanding the size of the balance sheet (on the liability size specifically).

In our opinion—and we rush here to add that is only our opinion—the key to unwinding the Woodward-Hall "puzzle" is in the last sentence of the Bernanke quotation above: "the Federal Reserve's credit easing approach focuses on the mix of loans and securities that it holds and on how this composition of assets affects credit conditions for households and businesses."

It is instructive to examine the source of the recent reduction in the Fed's balance sheet.

Though several categories of Fed assets have declined in recent weeks, the really large changes have been in currency swaps and the Commercial Paper Funding Facility or CPFF. In simple terms, currency swaps are the provision of dollars to foreign central banks to help satisfy dollar-based liquidity needs in foreign financial markets, the CPFF is a Federal Reserve funding facility to assist in the functioning of domestic commercial paper markets.

As the Chairman suggested in his Stamp Lecture:

"…when credit markets and the economy have begun to recover, the Federal Reserve will have to unwind its various lending programs. To some extent, this unwinding will happen automatically, as improvements in credit markets should reduce the need to use Fed facilities."

At least in U.S. dollar interbank lending markets, liquidity pressures have abated, as LIBOR rates have fallen substantially since last fall and have held relatively steady in recent weeks, and term financing premia have similarly eased. 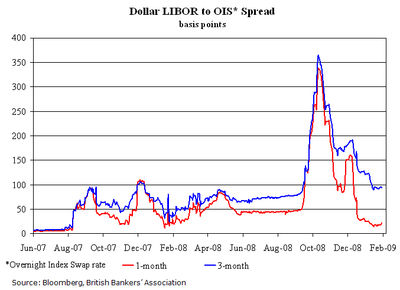 Commercial paper yield spreads have also narrowed considerably for both asset-backed and financial paper since the introduction of the CPFF last fall: 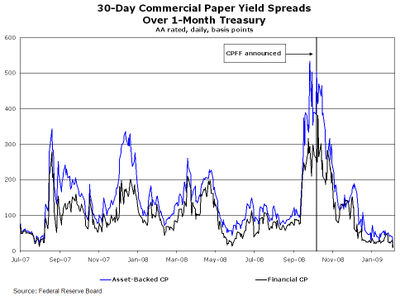 Interestingly, a large amount of maturing CPFF paper was not reissued into the CPFF or the market in late January. This decline could be a result of some borrowers shifting to other, cheaper sources of credit. From CNNMoney:

"The Fed's commercial paper funding facility was a popular alternative for cash-strapped corporations at the height of the credit crunch, but demand for funding through the program has waned. Another government sponsored program, the FDIC's Temporary Liquidity Guarantee Program backs financial institution debt issued up to 10 years, a more attractive alternative for many companies."

There is one additional wrinkle. Agency mortgage-backed securities—which the FOMC has authorized the purchase of, up to $500 billion—show up on the balance sheet at the time the trades settle. As of February 4, the Fed's balance sheet has $7.4 billion in Agency MBS. However, if you sum the purchases that the NY Fed posts on their Web site, the total is closer to $92 billion so far. Thus, roughly $85 billion in MBS the Fed has purchased have yet to show up on the balance sheet because the trades haven't settled. (Hat tip to our colleague Mike Hammill for bringing this to our attention.)

The central bank's balance sheet is in fact contracting. Maybe. But is it policy tightening? Doubtful.