Cost pressures at the manufacturing level appear to be easing—at least, so say the manufacturers in our Business Inflation Expectations survey. In June, manufacturers reported that unit costs were up only 1.3 percent over the last 12 months, a full percentage point below their assessment at the end of last year. Retailers, on the other hand, report unit cost increases of 2.1 percent, down a bit from May, but 0.3 percentage points higher than in December.

We put a special question to our panel in June that may shed a little light on these patterns. When we asked firms to tell us what has been driving their unit costs over the past 12 months, manufacturers saw considerably less pressure coming from their cost of materials compared with other firms. Perhaps this discovery isn't very surprising. After all, commodity prices have been falling pretty sharply of late, and these costs are especially influential to manufacturers' assessment of the cost environment. (Indeed, in response to a special question we asked our panel in March, manufacturers ranked materials costs as the number-one influence on their pricing decisions.)

Does the fall in commodity prices mean we can expect a pass-through of these lower costs to consumers?

Perhaps. There's certainly a strong intuitive appeal to the "pipeline" theory of inflation. Here's the idea as described by the Bank of England (BOE):

"Consumer prices…can be thought of as the end of a 'pipeline' of costs and prices. The final price will be made up of many different components of cost as well as the retailer's profit or margin… Prices at one stage of the pipeline become costs for the next stage…"

But economists who have looked down the inflation pipeline haven't found flows, but rather trickles. Years ago, Todd Clark of the Cleveland Fed put it this way while he was at the Kansas City Fed: "the empirical evidence… shows the production chain only weakly links consumer prices to producer prices."

So the "inflation pipeline" theory isn't that simple, as the BOE goes on to explain:

"The [pipeline] idea is a simplification… Prices are determined by the interaction of supply and demand. If the cost of raw materials rises, for example, producers or retailers might accept lower profit margins rather than raise their prices. They are more likely to do this if demand is weak or because of competition. The degree of competition in markets can affect how much cost increases are passed on to consumers."

Investigations into what might be obstructing the flows through the inflation pipeline have taken several approaches, including the one suggested by the BOE above: Firms may vary their markups (or margins) to damp the influence of costs on prices as they pass from one stage of production to the next. This idea has become a cause célèbre in macroeconomics and a key element of something called the New Keynesian Phillips Curve.

And so we've been keeping our eyes on how our panel assesses their margins, and we note something pretty striking. That is, margins are rising, but primarily for retailers. Indeed, as our panel sees it, retail margins are getting pretty close to returning to normal. Manufacturers, however, still see their margins as well below normal. 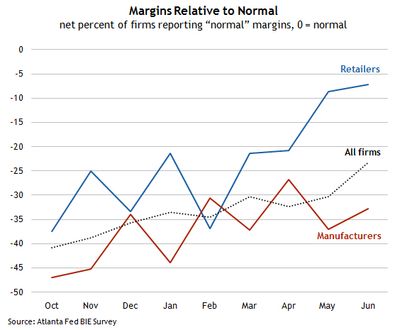 Expanding margins, then, may slow the flow of falling commodity prices through the inflation pipeline. Manufacturers may take the fall in commodity prices as an opportunity to improve their woeful margins. And if they do pass these cost savings on down the production chain, it still might not hit consumers' wallets if retailers continue to increase their margins. (Based on our survey, that's what seems to have been going on lately, anyhow.)

For other insights from the June Business Inflation Expectation survey, see the Inflation Project on our website.

Nicholas Parker, economic research analyst, all with the Atlanta Fed