Weighing In on the Recent Discrepancy in the Inflation Statistics

Recently, there has been a divergence between inflation as measured by the Consumer Price Index (CPI) and the preferred inflation measure of the Federal Open Market Committee (FOMC), which is the price index for personal consumption expenditures (PCE). That divergence is fairly evident in the “core” measures of these two price statistics shown in the chart below.

This strikes us (and others, like Reuters’ Pedro da Costa) as a pretty significant development. The core CPI is telling us that the underlying inflation trend is still holding reasonably close to the FOMC’s longer-term target of 2 percent. But the behavior of the core PCE is rather reminiscent of 2010, when the inflation statistics slid to uncomfortably low levels—a contributing factor to the FOMC’s adoption of QE2. Which of these inflation statistics are we to believe?

Part of the divergence between the two inflation measures is due to rents. Rents are rising at a good pace right now, and since it’s pretty clear that the CPI over-weights their influence, we might be inclined to dismiss some part of the CPI’s more elevated signal. But then there are all those “non-market” components that have been pulling the PCE inflation measure lower—and these aren’t in the CPI. These are components of the PCE price index for which there are no clearly observable transaction prices. They include the “cost” of services provided to households by nonprofit organizations, or the benefits households receive that can only be imputed (i.e., that “free” checking account your bank provides if you maintain a high balance.) Since we can’t really observe the price of these things, we’d probably be inclined to dismiss their influence on PCE the inflation measure. But we’ve done the math, and the impact of these two influences accounts for only about a third of the recent gap between the core PCE and the core CPI inflation measures. Most of the disagreement between the two inflation estimates is coming from elsewhere.

We could continue to parse, item by item, all the various components and weights of the two statistics to get to the bottom of this discrepancy. But in the end, such an accounting exercise would merely tell us why the gap between the two measures has emerged, not which measure is giving the best signal of emerging inflation trends.

As an alternative approach, we thought we’d let the data speak for themselves and search for a common trend that runs through the detailed price data. What we have in mind is to compute the “first principal component” of the disaggregated data used to calculate the CPI and the PCE price indexes. The first principal component is a weighting of the data that explains as much of the data variation as possible. So, in effect, the detailed price data in each price index are being reweighted in a way that reveals their most commonly shared trend, and not by their share of consumer expenditure. 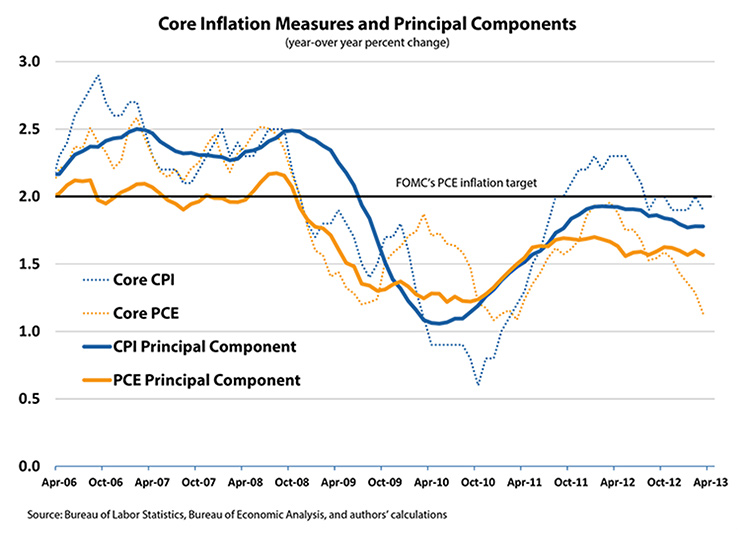 So what do we make of this picture? Well, three things:

A third takeaway from the chart is that the “disinflation” pattern traced out by these principal components has been gradual and modest—much more so than what the core PCE has recently indicated and what the data were telling us back in 2010.

Does that mean we should ignore the recent disinflation being exhibited in the core PCE inflation measure? Well, let’s put it this way: If you’re a glass-half-full sort, we’d say that the recent disinflation trend exhibited by the PCE price index doesn’t seem to be “woven” into the detailed price data, and it certainly doesn’t look like what we saw in 2010. But to you glass-half-empty types, we’d also point out that getting the inflation trend up to 2 percent is proving to be a curiously difficult task.