Given its role in touching nearly every aspect of life across the globe and given the higher and volatile prices over the past half-decade, oil supply has been an incessant topic of conversation for much of our recent memory. Yet the tone of the conversation has dramatically pivoted recently from arguments about whether peak oil or sky-high oil prices could spur a global economic meltdown (anyone remember 2008?) to the shifting energy balance as a result of rapidly growing oil production from North America.

Crude prices have remained remarkably stable over the past year in the face of a long list of supply disruptions, from Nigerian oil theft to Syrian civil war to an export standoff between Sudan and South Sudan. The reason in large part is a thick new blanket of North American oil cushioning the markets.

However, despite the increase in U.S. oil production, global oil prices have stabilized at relatively high levels, as the chart below shows. 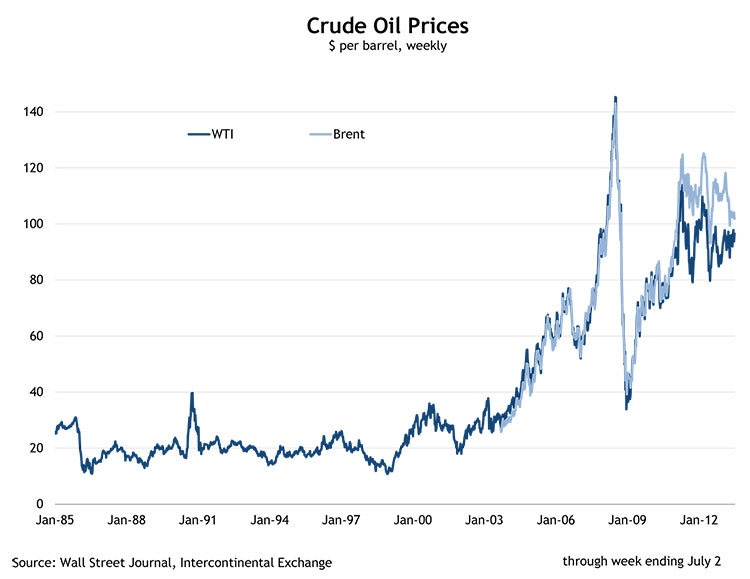 However, the two seemingly opposing narratives—that of high oil prices and that of an emerging oil and gas abundance—are fundamentally linked. In fact, if it hadn’t been for such high oil prices, this new surge in North American oil production may not have happened. It is much more difficult to rationalize drilling activity in deep offshore areas, hard shale, or tar sands—from which, by nature, oil is expensive to produce—without high oil prices. (West Texas Intermediate, or WTI, oil averaged $31 per barrel in 2003, which, even in real terms, is only about 2/5 of today’s prices.) Analysts at Morgan Stanley estimate that the break-even point for Bakken (North Dakota) crude oil is about $70 per barrel and that even a price of $85 per barrel could squeeze out many of the unconventional producers.

What does all this mean for prices? Well, keep in mind that oil is a global commodity. So the roughly two million barrels of oil per day that have entered the market from the U.S. fracking boom represent a big shift domestically but only just over 2 percent of global oil consumption.

And while the United States is seeing growing oil supplies and moderating demand, a different trend is taking place globally, with rising demand from China and other emerging economies coupled with declining supply from older fields and OPEC efforts to keep prices higher through production limits.

However, not everyone believes that higher prices are here to stay. Some analysts have begun to warn that a price crash may be looming. Paul Stevens, an energy specialist with Chatham House, argues that we may be headed for a replay of the price crash in 1986 when high prices triggered demand destruction while bringing new, more expensive sources of supply to the market from the North Sea and Alaska.

Only time will tell where global oil prices will ultimately shake out, but for now, the larger supply cushion has certainly been a welcome development in the United States. Back to the Wall Street Journal article:

The new supply...is acting as a shock absorber in a global supply chain that pumps 88 million barrels of oil to consumers each day. That helps everyone from manufacturers to motorists, by steadying fuel prices and making budgeting easier.

Authors’ note: We didn’t touch on the difference between WTI and Brent oil prices in this post, despite the fact that the changing global oil production landscape has undoubtedly contributed to that spread. For those interested, we recommend some recent analysis from the Energy Information Administration on the narrowing spread between WTI and Brent.