The Federal Open Market Committee (FOMC) has been operating with two tools (well described in a recent speech by our boss here in Atlanta). The first is our large-scale asset purchase program, or QE to everyone outside of the Federal Reserve. The second is our forward guidance on the federal funds rate. Here’s what the fed funds guidance was following the July FOMC meeting:

[T]he Committee decided to keep the target range for the federal funds rate at 0 to 1/4 percent and currently anticipates that this exceptionally low range for the federal funds rate will be appropriate at least as long as the unemployment rate remains above 6-1/2 percent, inflation between one and two years ahead is projected to be no more than a half percentage point above the Committee's 2 percent longer-run goal, and longer-term inflation expectations continue to be well anchored.

But forward guidance isn’t worth much if the public has a very different view of how long the fed funds rate will be held near zero. The Federal Reserve Bank of New York has a good read on Wall Street’s expectation for the federal funds rate. Its June survey of primary dealers (a set of institutions the Fed trades with when conducting open market operations) saw a 52 percent chance that the fed funds rate will rise from zero in 2015, and the median forecast of the group saw the fed funds rate at 0.75 percent at the end of 2015. In other words, the bond market is broadly in agreement with the fed funds rate projections made by FOMC meeting participants.

But what do we know about Main Street’s perspective on the fed funds rate? Do they even have an opinion on the subject?

Our perspective on Main Street comes from our panel of businesses who participate in the monthly Business Inflation Expectations (BIE) Survey. And we used our special question to the panel this month to see if we could gauge how, indeed whether, businesses have opinions about the future of the federal funds rate. Here’s the specific question we put to the group:

Seventy-five percent of our respondents had a median-probability forecast for the fed funds rate somewhere between 0.5 percent and 1.5 percent by the end of 2015. That forecast compares very closely to the 73 percent of the June FOMC meeting participants. 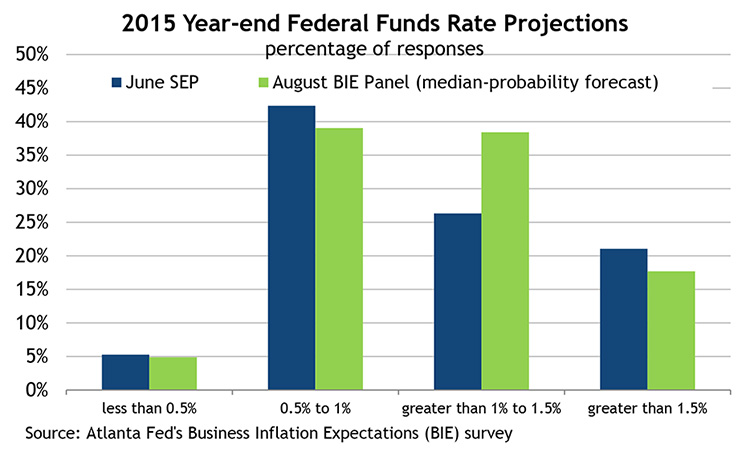 
You may have noticed in the above question a bracketed bit of information about the Federal Reserve’s forecast for the federal funds rate: “In June, the Federal Reserve projected the federal funds rate to be 1% by the end of 2015.” Actually, this bit of extra information was supplied only to half of our panel (selected at random). A comparison between these two panel subsets is shown in the chart below. 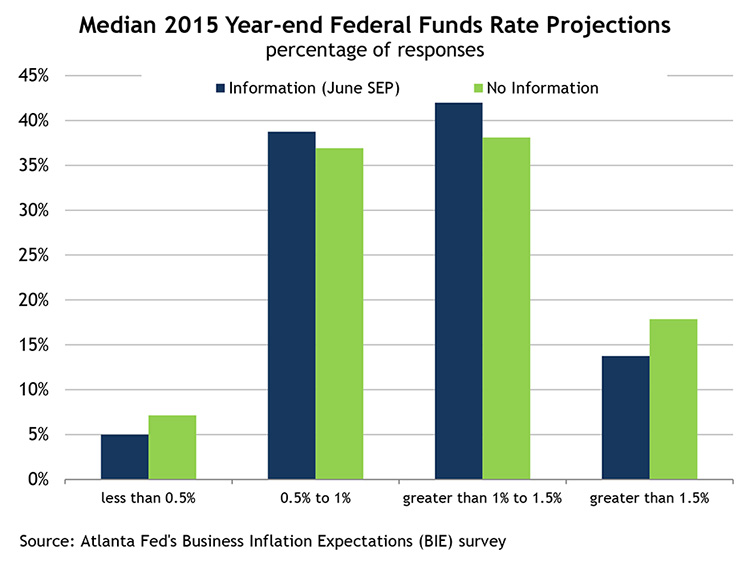 These two subsets are very similar. (If you squint, you might see that the green bars appear a little more diffuse, but this isn’t a statistically significant difference…we checked.) This result suggests that the extra bit of information we provided was largely extraneous. Our business panel seems to have already had enough information on which to make an informed prediction about the federal funds rate.

Finally, the data shown in the two figures above are for those panelists who opted to answer the question we posed. But, at our instruction, not every firm chose to make a prediction for the federal funds rate. With this month’s special question, we instructed our panelists to “Please feel free to leave this question blank if you have no opinion.” A significant number of our panelists exercised this option.

The typical nonresponse rate from the BIE survey special question is about 2 percent. This month, it was 22 percent—which suggests that an unusually high share of our panel had no opinion on the future of the fed funds rate. What does this mean? Well, it could mean that a significant share of Main Street businesses are confused by the FOMC’s communications and are therefore unable to form an opinion. But a high nonresponse rate could also mean that some segment of Main Street businesses don’t believe that forward guidance on the fed funds rate affects their businesses much.

Unfortunately, the data we have don’t put us in a very good position to distinguish between confusion and apathy. Besides, we’re optimistic sorts. We’re going to emphasize that 78 percent of those businesses we surveyed responded to the question, and that typical response lined up pretty well with the opinions of FOMC meeting participants and the expectations of Wall Street. So, while not everyone is dialed in to our forward guidance, Main Street seems to get it.