Atlanta Fed's Jobs Calculator Drills Down to the States

In March 2012, the Federal Reserve Bank of Atlanta launched its Jobs Calculator, an application that illustrates the relationship between the unemployment rate, growth in payroll employment, the labor force participation rate, and a few other variables to boot. Most notably, it tells us how many jobs need to be created to achieve a specific unemployment rate within a given period of time. This tool has turned out to be a useful one for anchoring discussions about national employment growth and unemployment among policy makers and the media.

We are pleased to announce that the Atlanta Fed recently unveiled the state-level Jobs Calculator. The same tool that has been used for national discussions is now available for state-level analyses (see the figure below).

Like the national Jobs Calculator, the state-level version allows the user to input a target unemployment rate, choose the number of months desired to hit the target rate, and find out how many new jobs are required per month to get there. But the calculator is flexible enough to allow other interesting experiments as well.

Consider the case of Florida. During the recession, Florida experienced a significant decline in its population growth. It has gone from a high of about 0.2 percent growth per month (roughly 2.4 percent per year) to its current 0.115 percent growth per month (about 1.38 percent per year; see the figure below). Suppose policy makers in Florida want to know how a return to prerecession population growth might affect the number of jobs needed to maintain its current unemployment rate over the next 12 months. (Note that as of August, the unemployment rate in Florida was 7 percent.) 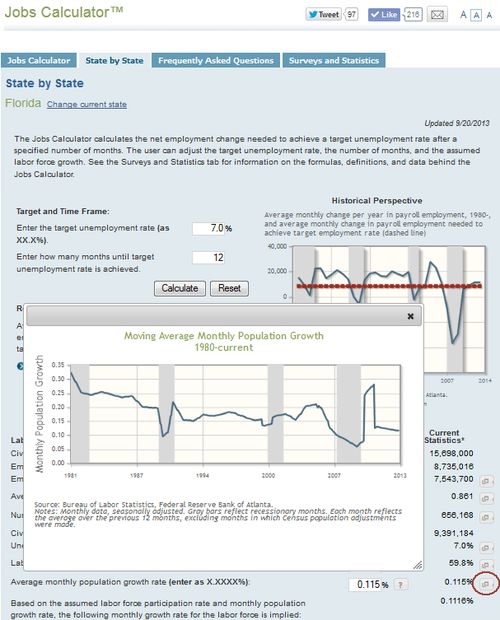 The calculator's default settings always answer the question, “How many jobs per month does it take to maintain today's unemployment rate over the next 12 months?” To answer our hypothetical policy makers' question, all they would have to do is enter a prerecession monthly population growth rate of 0.2 percent into Florida's state Jobs Calculator, leaving everything else the same. Given the current data in hand, we would discover that Florida would need to generate about 6,000 more jobs per month at the higher population growth than at the current—and lower—population growth to stabilize the unemployment rate at 7 percent.

The data behind the state-level Jobs Calculator come from the U.S. Census Bureau's Establishment Survey, the same data used for the national Jobs Calculator, combined with the Local Area Unemployment Statistics (LAUS) programs run by each state. The LAUS contain the regional and state employment statistics that are consistent with data from the Census Bureau's Current Population Survey. State-level population estimates are provided by the U.S. Census Bureau (and are described in more detail here). You'll note that the LAUS data, especially for very small states, look more erratic than national or larger states' numbers—the unfortunate consequence of small sample sizes.

LAUS data are generally issued about the third Friday of each month following the reference month, which means that the state-level Jobs Calculator statistics will be updated about two weeks after the national Jobs Calculator. The schedule of release dates is available from the U.S. Bureau of Labor Statistics.

By Julie Hotchkiss, a research economist and policy adviser in the Atlanta Fed's research department