The ZPOP Ratio: A Simple Take on a Complicated Labor Market

She also noted that FOMC participants look at many different indicators of labor utilization, because the headline unemployment rate (commonly known as the U-3 rate) is overstating the health of the labor market. One alternative measure that has received some attention is the employment-to-population (EPOP) ratio. However, a well-recognized problem with the EPOP ratio is that because it defines utilization as employment, trends in demographic and behavioral labor force participation can affect it.

This problem is partially addressed by looking at the EPOP ratio for the prime-age population, or by making adjustments for demographic changes as suggested by Kapon and Tracy at the New York Fed and further analyzed by our Atlanta Fed colleague Pat Higgins. Here, we propose an alternative approach that uses a broader definition of utilization that makes it less affected by labor supply trends.

The Current Population Survey does not ask the question "are your labor services being fully utilized?" Therefore, we have to use our judgment to classify someone as fully utilized. The figure below shows the choices we make. We assume that everyone who says they are working fewer hours than they want is underutilized (the red boxes). This includes those in the labor force but unemployed, those not in the labor force but wanting a job, and those working part-time but wanting full-time hours (similar to the treatment of underutilization in the broad U-6 unemployment rate measure).

Everyone working full-time, working part-time for a noneconomic reason, and those who say they don't want a job are considered fully utilized (the green boxes). Of course, this takes the "don't want a job" classification at face value. For example, someone who is retired is counted as fully utilized, irrespective of the (unknown) reason they chose to retire. 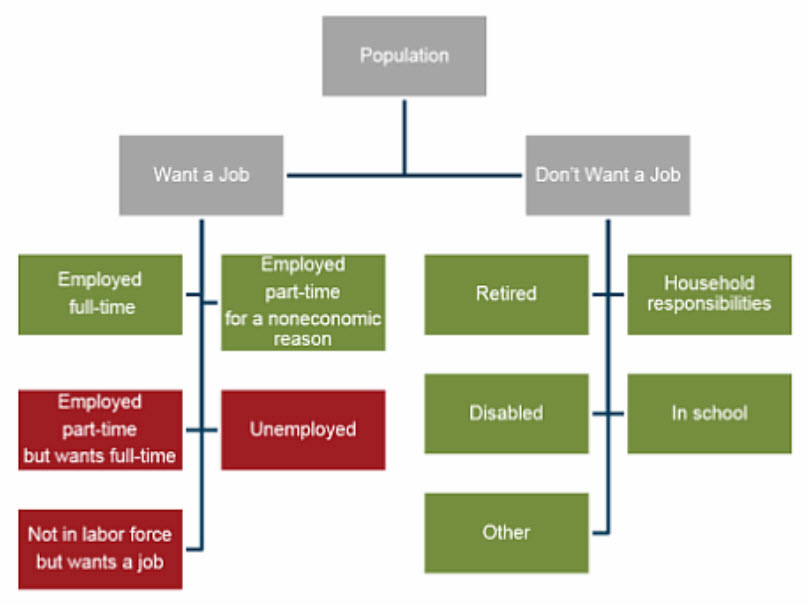 As shown in the Chart 1 below, the share of the population 16 years or older that is fully utilized—what we call the utilization-to-population (ZPOP) ratio—is currently about 1.5 percentage points below its prerecession level, after having fallen by 6 percentage points during the recession. 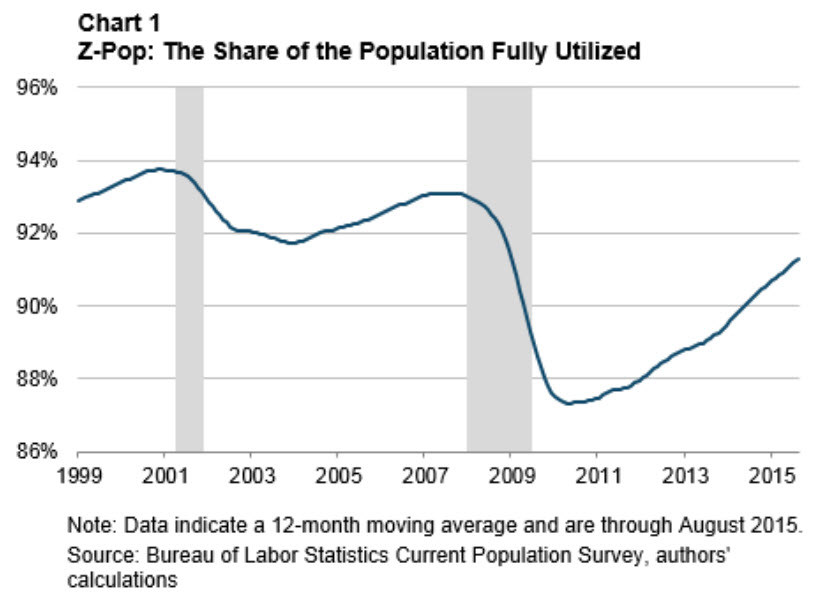 Notice that because the ZPOP ratio treats those who are not employed and don't want a job as fully utilized, it is less affected by demographic and behavioral trends in labor force participation than the EPOP ratio. (You can learn more on our website about how demographic and behavioral trends are affecting labor force participation.) When compared with the EPOP ratio, the ZPOP ratio paints a somewhat rosier picture of labor market conditions (see chart 2). 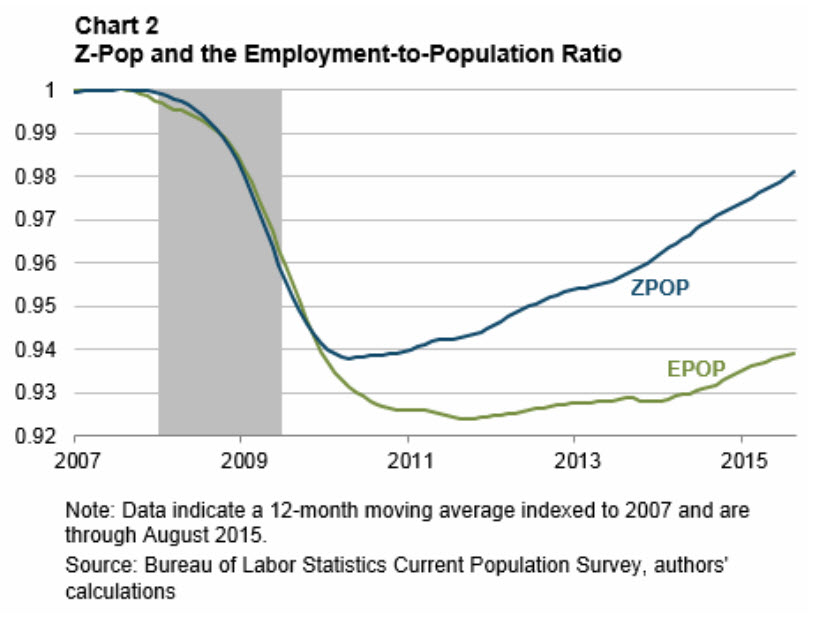 Conclusion
In sum, the utilization-to-population (ZPOP) ratio is the share of the working-age population that is working full time, is voluntarily working part-time, or doesn't want to work any hours. According to this measure, about 91 percent of the working-age population is considered fully utilized. The remaining 9 percent are "underutilized" and are a roughly even mixture of the unemployed, those not in the labor force but wanting to work, and those working part-time but wanting full-time hours.

By John Robertson, a senior policy adviser in the Atlanta Fed's research department, and