Mark Thoma has been hanging out with my boss or at least was at the same conference, where Thoma had a chance to try out his reporter chops:

"I just got out of a press conference with Dennis Lockhart (Atlanta Fed president) and Charles Evans (Chicago Fed president). I can't say there was any real news, but I did manage to ask a question... I asked whether the 2% inflation target was truly symmetric."

Thoma got an answer, though seemingly not one that left him totally convinced:

"Both insisted that the target is symmetric. However, Lockhart said that we know much more about the effects of inflation than deflation, and that preventing deflation was therefore job number one (which doesn't really answer the question). He didn't explain what he is so afraid of if inflation goes up...

"Evans, while explicitly agreeing the target was symmetric, made comments that indicated that it may not be. He said the Fed has not done a very good job of communicating its tolerance around the 2 percent target, both up and down, and they need to improve. But if the target is really symmetric, simply saying that (along with the tolerable range) is all that is required. Talking separately about tolerance for over and under-shooting isn't needed."

Evans' and Lockhart's statements stand on their own, but we've collected some information via the Atlanta Fed's Business Inflation Expectations survey that helps me think about the Thoma question. The chart below plots the answers, collected in the February and April surveys, to the following query: "Projecting ahead, to the best of your ability, please assign a percent likelihood to the following changes to unit costs per year over the next five to 10 years." 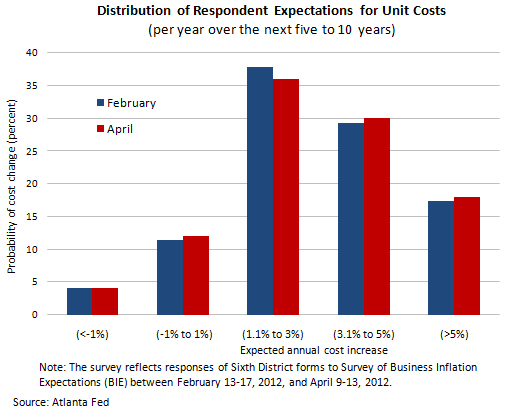 The question focuses on unit labor costs in order to elicit responses about what businesses may actually be planning for, as opposed to their guesses about a more abstract concept of overall inflation. The question focuses on expectations five to ten years into the future because the inflation goal of the Federal Open Market Committee (FOMC) is explicitly a long-run objective.

The obvious pattern in these survey responses is their asymmetry to the upside. The most probable outcome, according to the respondents, is that long-term costs will rise in a range that includes the FOMC's long-run inflation objective. But they also put an almost 50 percent probability on annual outcomes higher than 3 percent. Less than 20 percent probability is placed on costs rising at rates of less than 1 percent.

This picture is one of asymmetric risks to the inflation outlook, and as such it is an important element in thinking through policy choices. Symmetry in the sense of having an equal distaste for misses on either side of an objective does not necessarily imply symmetry with respect to the risks of meeting that objective.

To begin with, the Fed does have a dual mandate. Disinflation or, in the extreme, deflation has the potential to be problematic for growth and employment when interest rates are very low. The reason, if you buy the analysis, is that, with no room for rates to move lower, a decline in inflation raises the real cost of borrowing. A higher cost of borrowing restrains spending, creating an additional drag on economic activity in already tough circumstances.

The reverse argument has, of course, been made for temporarily tolerating inflation that is somewhat higher than the long-run objective. But even if you aren't quite sold on the wisdom of that approach—and I'll get to that in a bit—it is clear that, with policy rates near zero, misses to the downside on inflation bring risks to the Fed's growth mandate that are not implied by misses to the upside. Hence President Lockhart's comment regarding the importance of preventing deflation.

So why not respond to this asymmetric risk to growth by taking a chance on higher inflation? That question takes us back to the chart above. Taken at face value, the probabilities reported by our survey respondents suggest that the FOMC has been pretty successful in convincing folks that very low rates of inflation or deflation will not be allowed to set in. Perhaps this conviction is not surprising given the relatively aggressive responses of the committee to the disinflation scares of 2003 and 2010.

Hourly and Weekly Perspectives on Wage Growth during the Pandemic

WFH Is Onstage and Here to Stay