Update: Nicolas Groshenny over at voxeu.org discusses his December 2010 working paper, in which he performs a counterfactual analysis that lets the federal funds rate follow a Taylor rule: "[The] results are in line with Bernanke's (2010) testimony. They suggest that the deviations from the Taylor rule between 2002 and 2006 reduced the risk of deflation and high unemployment materially, and were thereby consistent with the pursuit of the dual mandate."

In a Wall Street Journal article this past Friday, Stanford economist John Taylor articulated a two-track plan to restore growth. The first track pertains to fiscal policy, but what always attracts our attention here at macroblog are Professor Taylor's comments on monetary policy, the essential second track in his formulation for economic restoration. Here are the highlights (emphasis mine):

"… the Fed should lay out a plan for reducing its extraordinarily large balance sheet. To achieve a more predictable rules-based policy going forward, the Fed's objectives should be clarified…

"Recently the multiple objectives [for both price stability and maximum employment] have been used as a rationale for interventionist policies, such as QE2, an approach that Fed officials avoided in the 1980s and '90s. Such interventions can have the unintended consequence of increasing unemployment—as illustrated by the decisions to hold interest rates very low in 2003–2005, which may have caused a bubble and led to the high unemployment today.

"The Fed should also be required to report in writing and in hearings its strategy for monetary policy… the renewed requirement should focus on the strategy for setting interest rates. The Fed should establish its own strategy and report it to Congress."

I bolded portions of those passages because I have some thoughts on them. These are not new thoughts, but I believe they are worth noting again:


The minutes go on to explain the options for deploying those tools, actions, and plans (that have since been completed) for ensuring that the tools are operational and agreement by FOMC participants that "raising the IOER rate and the target for the federal funds rate would be a key element of a move to less accommodative monetary policy." 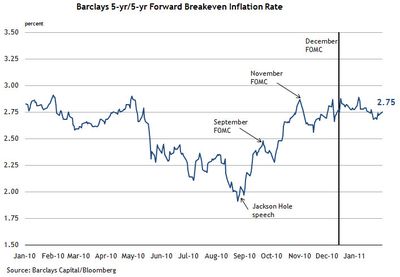 Stabilizing inflation expectations is at the core of any central bank's price stability objective. As these charts clearly illustrate, the concern that expectations were becoming unanachored was real, and the policy, I believe, has been successful in addressing that problem.

Whether the Fed's so-called dual objectives complicate policy going forward remains, of course, to be seen. But from where I sit, the dual objective/mandate question is a red herring in the discussion of whether QE2 was warranted or not.

An important issue with this critique, noted by Chairman Bernanke in a speech delivered about this time last year, is that, at least up to the point where the federal funds rate hit its effective lower bound, the FOMC did behave in a consistent rule-based fashion—just not precisely the one preferred by Professor Taylor: In the chart above, the blue line is a simple version of the Taylor rule, which prescribes that the central bank react to contemporaneous inflation and GDP. But, as Chairman Bernanke explained:

The green line in the chart above depicts a "forecast-based Taylor rule," and as can be clearly seen, it is quite a good indicator of the funds rate policy actually chosen—and chosen in a consistent rule-like manner—by the FOMC.

That consistency is certainly no virtue if the implicit rule is flawed. But that brings me to my final point.

There is no absolution for policymakers in that conclusion. But, I believe there is a warning about carefully separating the baby from the bath water when evaluating past, present, and future monetary policy actions.