The Atlanta Fed's SouthPoint offers commentary and observations on various aspects of the region's economy.

A broader view of labor markets

I'm writing from the National Association of Business Economists' (NABE) 28th annual Washington Economic Policy Conference, titled "From Crisis Management to Long-Term Renewal." Conferences like this, and other NABE meetings, offer a chance to participate in important economic policy discussions with leading economists and policymakers from around the world.

I wanted to share a few thoughts from yesterday's events, the first of which was a speech by Federal Reserve Chairman Ben Bernanke. He focused on labor markets, but as we have discussed in SouthPoint before, lessons learned by examining national employment trends help us understand what is happening in our region.

We've reported that many of our business contacts have told us that they are having difficulties finding skilled employees for vacancies in their workforce. It's a theme we picked up on in the energy and technology sectors a while back, but more recently manufacturers and some professional services contacts have expressed similar concerns. We saw this as signs of possible structural problems in the labor force. Our first issue of Southeastern Insights released last week noted that:

"We also continue to receive feedback about the lack of qualified labor in several industries. For example, to meet their labor needs, some firms are holding job fairs—some well outside their bases of operations—to attract talent, and they are bringing back retirees on a contract basis to help train new workers hired without the requisite skills." 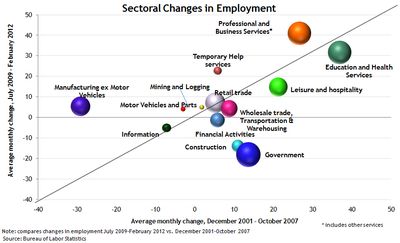 "If you try, it isn't too hard to see in this chart a picture of a labor market that is very close to ‘normalized,' excepting a few sectors that are experiencing longer-term structural issues. First, most sectors—that is, most of the bubbles in the chart—lie above the horizontal zero axis, meaning that they are now in positive growth territory for this recovery. Second, most sector bubbles are aligning along the 45-degree line, meaning jobs in these areas are expanding (or in the case of the information sector, contracting) at about the same pace as they were before the ‘Great Recession.' Third, the exceptions are exactly what we would expect—employment in the construction, financial activities, and government sectors continues to fall, and the manufacturing sector (a job-shedder for quite some time) is growing slightly."

So getting back to the conference's topics and discussions, Chairman Bernanke's remarks acknowledged that some degree of skills mismatch is evident in the labor force. However, he reported that this only explains a small part of why unemployment remains very high. The evidence, according to the chairman, is that the labor market woes are explained by cyclical problems—namely, the fact that the recent recession was protracted and very deep by historical standards.

"Notwithstanding these welcome recent signs, the job market remains quite weak relative to historical norms, as I've already noted. After nearly two years of job gains, private payroll employment remains more than 5 million jobs below its previous peak; the jobs shortfall is even larger, of course, when increases in the size of the labor force are taken into account. And the unemployment rate in February was still roughly 3 percentage points above its average over the 20 years preceding the recession. Moreover, a significant portion of the improvement in the labor market has reflected a decline in layoffs rather than an increase in hiring."

The chairman went on ask, "What will lead to more hiring and, consequently, further declines in unemployment?" His response: "The short answer is mor -rapid economic growth."

Tomorrow, I'll be having breakfast with a few of my fellow Fed economists who are attending the conference. Comparing notes and experiences helps us all better understand economic developments in our respective regions. I'll also be attending additional conference proceedings. You too can take advantage of NABE's conferences and other programs in the future. You can also see if there are local NABE affiliates in your area. It's a great way to stay in touch and network with folks who want to share ideas and learn about current economic developments.

By Mike Chriszt, an assistant vice president in the Atlanta Fed's research department

It's Mostly Sunny in Florida

Southeast Manufacturing Dips in May

Assessing the Impact of Oil Price Declines on Louisiana's Economy

Trials and Tribulations in Transportation