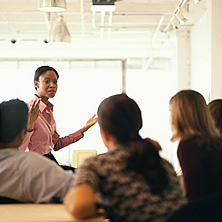 Gone are the days when governments are viewed as the sole producers of public services and residents as passive recipients of services. Currently, some municipalities are using community development initiatives that capitalize on the strengths of the community and its residents to improve living conditions. As such, residents can engage in the planning or implementation of their local public services. For example, through the Neighborhood Planning Unit System

—a citizen advisory council in Atlanta—residents make recommendations to the mayor and city council on zoning, land use, and other planning issues.

In the past, when some municipalities experienced considerable budget reductions in their police, fire, park, and other public services, residents voluntarily (but necessarily) picked up the slack by being auxiliary police officers, firefighters, and facility caretakers (see examples from the literature here

). Residents even helped clean the streets, parks, or other public areas in the community, and donated money for a community-related event, facility, or project.

). For this reason, I sought to understand what motivates residents to collaborate with their local government by conducting a case study of Atlanta.

First, I attended the monthly meetings of Atlanta's 25 neighborhood planning units (NPUs) for three months. Second, I conducted a focus group interview with eight NPU leaders to discuss the various ways in which they and other Atlanta residents collaborate with their local government. Findings from these two activities helped inform my questionnaire, which would provide a larger-scale assessment of the prevalence of citizen engagement in Atlanta (and possibly other similarly structured cities), the demographic makeup of participants, and their motivations for engaging with their local government. The questionnaire was made available in both paper and web form, and my total sample size was 797 observations. Here are the key findings from this study:

In the 1960s, planning scholar and practitioner Paul Davidoff asserted that physical structures are merely servants to those who use them and assign value to them. Today, it is still important that planners, community developers, economic developers, foundations, and policymakers shift their focus from inanimate objects (buildings, roads, and so on) to potentially affected individuals and communities.

My 2014 study revealed that residents' engagement is not primarily motivated by material rewards. However, if material rewards are what planners and developers seek, they might consider recruitment techniques that appeal to residents' nonmaterial desires for social and personal fulfillment.

Community engagement offers a way to build stronger, more resilient communities, as it involves residents in the very processes and decisions that affect their lives. Communities are only as strong as the relationships the residents have with their local governments. Local governments that enable inclusion and collaboration with their residents may be more equipped to weather a crisis and possibly even preempt it.

By Kelechi Uzochukwu, former community and economic development intern, currently an assistant professor in the University of Baltimore's School of Public and International Affairs