Take Me Out to the Ball Game...to Learn Economics 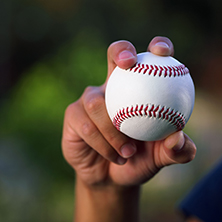 In his best-selling book Moneyball, Michael Lewis recounts the story of Oakland Athletics' manager Billy Beane, the first manager in baseball to use sabermetrics extensively to put together a winning team. Sabermetrics is the mathematical analysis of baseball statistics. In 2004, sabermetrics helped take the Boston Red Sox all the way to the World Series, where their win over the St. Louis Cardinals broke the 86-year "Curse of the Bambino." Economists, including current Fed Chairman and avid baseball enthusiast Ben Bernanke, quickly became fans of the technique, as economists also rely on statistics to understand and predict future economic trends. But baseball and economics don't just have statistics in common. Baseball can be used to illustrate a number of economic concepts, from basic principles to business strategy. In fact, sports economics courses are some of the most popular electives on many college campuses. The sampling of ideas here will give you suggestions for using America's favorite pastime, with its mix of athleticism, entertainment, and business, as a teaching tool in your economics classroom.

Play ball: Absolute and comparative advantage, opportunity cost
Many people don't know that legendary slugger Babe Ruth actually started his career with the Red Sox as a pitcher. The Babe was one of the best pitchers in the game, but after just a few years the team switched him to the outfield. Why? In the outfield, Ruth could, barring injuries, play in every game. This allowed the Red Sox to take advantage of the fact that he was also one of the greatest hitters in the game. Babe Ruth's skills help illustrate the concepts of absolute and comparative advantage. It is fair to say that he had an absolute advantage in both pitching and hitting. But as a pitcher who would see play in only about one in every five games, he had a higher opportunity cost (hits as a slugger) than when he played the outfield. Babe Ruth added more value to the team when he specialized in the area where he had a comparative advantage: hitting.

Opportunity cost can also be illustrated when we look at the choices made by young players beginning their professional careers. For example, Alex Rodriguez of the New York Yankees, known to fans as A-Rod, signed a letter of intent to play baseball for the University of Miami. But he never took advantage of the scholarship, signing with the Seattle Mariners instead at the age of 17. High school athletes with the potential to go pro must weigh the benefits of college (a degree, gaining skills, the college experience) with the costs (possible injuries, lost income). Rodriguez has broken many Major League records in his career and is a three-time American League most valuable player. His salary deals have also broken records—Rodriguez's current $28 million salary is the highest pay in baseball and part of a 10-year, $275 million contract that includes additional multimillion-dollar incentive bonuses. When deciding to forgo college, Rodriguez weighed the opportunity costs of delaying his entry in the game, and made the choice to play.

On the mound: Market and derived demand
Baseball teams sell both sports and entertainment. The demand for tickets depends on a number of factors, including the team's record of wins and losses, the size and average income of the market, the chance that a team will make the playoffs, and even the weather. While some teams command loyalty regardless of their on-field performance, these factors affect attendance and ultimately teams' profitability. Despite a talented group of young players and a number of recent appearances in the American League playoffs, including a trip to the World Series in 2008, the 2012 Tampa Bay Rays had the lowest attendance in the league. The Miami Marlins built a beautiful new stadium and hired a new manager and star players but still landed at the bottom of the sport in revenues, prompting a postseason fire sale to the Toronto Blue Jays.

One possible explanation for the struggles that Florida teams face is the state's large elderly population, who may not have the disposable income for games and who may not want to drive to night games. Ticket sales can also be affected by economic conditions. The CNBC blogger John Melloy, in an online USA Today article, even suggested that attendance at Major League Baseball (MLB) games be used as an economic indicator. After peaking in 2007, attendance fell for each of the next three seasons as the economy slipped into recession. But attendance began to rise in 2011, and the major leagues brought in a record $7.5 billion in revenues last year.

As entertainment, baseball has a number of competitors, such as movies, video games, other sports, even watching the game on TV. The price of complementary goods also affects the demand for baseball tickets. Each year Team Marketing Report, a sports marketing publishing company, puts together a Fan Cost Index™, a market basket that includes tickets, food, beverages, parking, and souvenirs for a family of four attending a major league game. At $336.99, the Red Sox games are the priciest. A trip to see the Arizona Diamondbacks is a bargain at $145.94. The index also includes which teams lowered and raised their prices, and by how much. These figures can be used to calculate elasticity of demand for seats when they are combined with attendance figures.

Consumer preferences and size of the market are other demand determinates. According to a 2006 Gallup poll, baseball is the favorite sport of just 6 percent of 18- to 29-year-olds, compared to 18 percent of people 65 and older and 11 percent of those aged 50 to 64.  Baseball's largest market is New York, with nearly 20 million residents in the metropolitan area. The New York Yankees, who have won more World Series than any other team and have the largest payroll in baseball, are always near the top in MLB attendance. But performance counts: in 2012, the New York Mets, who struggled with a financial scandal and a losing season, brought in an average of 15,000 fewer fans per game than their crosstown rivals.

Cardinals fans were shocked when popular veteran Albert Pujols left St. Louis in 2012 to play for the Los Angeles Angels. But big-name talent brings fans to the stadium and therefore adds revenues to the teams and cities in which they play, an illustration of the economic concept of derived demand.

Batter up: Inflation, nominal and real variables
In 1930, Babe Ruth's $80,000 salary was higher than that of President Herbert Hoover ($75,000). Ruth is famously quoted as saying, "I had a better year than he did." Baseball salaries can be used to illustrate the effects of inflation and to teach the difference between nominal and real variables. Translating the Bambino's 1930 salary into today's money, we can see that he earned $1.09 million. The average player salary in 2012 was $3.4 million, according to CBSSports.com. Babe Ruth, considered by many the greatest in the game, was underpaid!

Team Marketing's Fan Cost Index also includes historical information on ticket prices and trends in general, which can be used to track ticket price inflation. According to the 2012 report, the total average Fan Cost Index rose 2.4 percent, to $207.68. This number compares with an overall 1.6 percent increase in the Consumer Price Index (CPI).

Scorecard: Revenues and profits
The late chewing gum heir and Chicago Cubs executive Philip Wrigley once noted that baseball was too much of a sport to be called a business and too much of a business to be called a sport. (Wrigley also founded the All-American Girls Professional Baseball League during World War II, made famous in the movie A League of Their Own.) Business or not, MLB revenues are expected to reach nearly $9 billion in 2014, according to Maury Brown on the Biz of Baseball website. Teams receive revenue from a number of sources, including not only ticket sales but also broadcast deals, merchandise and concession sales, and parking fees. The New York Yankees even have their own television network. Team costs include player salaries, which typically make up half of team expenses, and travel, marketing, player development, benefits, stadium upkeep, and administrative costs. An interesting lesson on the factors of production in baseball is on the National Baseball Hall of Fame site.

Under the MLB's collective bargaining agreement, teams share 34 percent of local revenues, with some successful big-market teams (Yankees, Red Sox) being net payers—meaning they pay more than they receive—and small-market teams (Rays, Pirates) receiving more than they put into the fund. Teams that exceed the MLB salary cap also pay a penalty to the league. For years, the Yankees have consistently paid this "luxury tax." This year, the Los Angeles Dodgers decided to also pay this penalty as part of their rebuilding strategy. This cost-benefit analysis seems to be paying off, as the Yankees and the Dodgers are the highest-valued teams in baseball. As of March 2013, the Yankees earned $471 million in revenue, nearly three times the amount brought in by the lowest-earning Tampa Bay Rays, according to Forbes. Payroll costs for teams are easily obtained on the web, and students can look at the correlation between payrolls, revenues, and winning percentages for each of the teams to determine if managers are maximizing profit and players are responding to incentives.

Other resources
Baseball statistics are a great way to practice mathematics, an idea that wasn't lost on former Fed Chairman Alan Greenspan, who honed his math skills this way. Current Chairman Bernanke even critiqued the way the earned run average is calculated. Stadium deals are also an interesting economic topic, and are discussed in a number of places, including in this Atlanta Fed interview. The National Baseball Hall of Fame's economics unit includes outstanding common core correlated lessons for elementary, middle, and high school students and the website also includes primary source documents from historical World Series programs. An interesting article by Lafayette College professor Thomas H. Bruggink puts forth a number of ways to use baseball as an illustration of economics, including a production possibilities curve that trades off current wins with aging veterans to future wins with promising rookies, a game theory idea based on the profits from televising additional games, and an example of the law of diminishing marginal returns when building a roster.

The market for baseball cards is also a great example of the laws of supply and demand and a perfectly competitive market, while the game itself has elements of both an imperfectly competitive monopsony, in which there is a single buyer market or buyer's monopoly  (the MLB), and monopoly power (talented players and one-team markets). The Boston Fed recently updated Peanuts & Crackerjacks, its interactive online baseball game that teaches economic concepts. The site also includes a sports page with excellent content material on the economics of sports and a teacher's guide with more than 50 activities and discussion questions. So if you find yourself at the ballpark this season savoring a hot dog and root, root, rooting for the home team, remember—economics is everywhere!

By Lesley Mace, economic and financial education specialist with the Jacksonville Branch of the Federal Reserve Bank of Atlanta, and an avid baseball fan
April 15, 2013