The Fed’s Inflation Goal: What Does the Public Know?

The Federal Open Market Committee (FOMC) has had an explicit inflation target of 2 percent since January 25, 2012. In its statement

If communicating this goal to the public enhances the effectiveness of monetary policy, one natural question is whether the public is aware of this 2 percent target. We've posed this question a few times to our Business Inflation Expectations Panel, which is a set of roughly 450 private, nonfarm firms in the Southeast. These firms range in size from large corporations to owner operators.

Last week, we asked them again. Specifically, the question is:

What annual rate of inflation do you think the Federal Reserve is aiming for over the long run?

Unsurprisingly, to us at least—and maybe to you if you're a regular macroblog reader—the typical respondent answered 2 percent (the same answer our panel gave us in 2015 and back in 2011). At a minimum, southeastern firms appear to have gotten and retained the message.

So, why the blog post? Careful Fed watchers noticed the inclusion of a modifier to describe the 2 percent objective in the March 2017 FOMC statement (emphasis added): "The Committee will carefully monitor actual and expected inflation developments relative to its symmetric inflation goal." And especially eagle-eyed Fed watchers will remember that the Committee amended

its statement of longer-run goals in January 2016, clarifying that its inflation objective is indeed symmetric.

The idea behind a symmetric inflation target is that the central bank views both overshooting and falling short of the 2 percent target as equally bad. As then Minneapolis Fed President Kocherlakota stated

in 2014, "Without symmetry, inflation might spend considerably more time below 2 percent than above 2 percent. Inflation persistently below the 2 percent target could create doubts in households and businesses about whether the FOMC is truly aiming for 2 percent inflation, or some lower number."

Do such doubts actually exist? In a follow-up to our question about the numerical target, in the latest survey we asked our panel whether they thought the Fed was more, less, or equally likely to tolerate inflation below or above its targe. The following chart depicts the responses.

In other words, more firms see the inflation target as a threshold (or ceiling) that the Fed is averse to crossing than see it as a symmetric target.

at the 42-minute mark) have discussed the symmetry about the Committee's inflation target. Our evidence suggests that the message may not have quite sunk in yet.

Brent Meyer, an economist, all in the Atlanta Fed's research department

Gauging Firm Optimism in a Time of Transition

Recent consumer sentiment index measures have hit postrecession highs, but there is evidence of significant differences in respondents' views on the new administration's economic policies. As Richard Curtin, chief economist for the Michigan Survey of Consumers, states

When asked to describe any recent news that they had heard about the economy, 30% spontaneously mentioned some favorable aspect of Trump's policies, and 29% unfavorably referred to Trump's economic policies. Thus a total of nearly six-in-ten consumers made a positive or negative mention of government policies...never before have these spontaneous references to economic policies had such a large impact on the Sentiment Index: a difference of 37 Index points between those that referred to favorable and unfavorable policies.

It seems clear that government policies are holding sway over consumers' economic outlook. But what about firms? Are they being affected similarly? Are there any firm characteristics that might predict their view? And how might this view change over time?

To begin exploring these questions, we've adopted a series of "optimism" questions to be asked periodically as part of the Atlanta Fed's Business Inflation Expectations Survey's special question series. The optimism questions are based on those that have appeared in the Duke CFO Global Business Outlook survey

since 2002, available quarterly. (The next set of results from the CFO survey will appear in March.)

. The survey period coincided with the week of the U.S. presidential election, allowing us to observe any pre- and post-election changes. We found that firms were more optimistic about their own firm's financial prospects than about the economy as a whole. This finding held for all sectors and firm size categories (chart 1).

We were curious how our firms' optimism might have evolved since the election, so we repeated the questions last month

Among firms responding in both November and February (approximately 82 percent of respondents), the overall level of optimism increased, on average (chart 3). This increase in optimism is statistically significant and was seen across firms of all sizes and sector types (goods producers and service providers).

The question remains: what is the upshot of this increased optimism? Are firms adjusting their capital investment and employment plans to accommodate this more optimistic outlook? The data should answer these questions in the coming months, but in the meantime, we will continue to monitor the evolution of business optimism.

By Nicholas Parker, economic policy specialist and both in the Atlanta Fed's research department, and

Lockhart Casts a Line into the Murky Waters of Uncertainty

Is uncertainty weighing down business investment? This recent article makes the case.

Uncertainty as an obstacle to business decision making and perhaps even a "propagation mechanism" for business cycles is an idea that that has been generating a lot of support in economic research in recent years. Our friend Nick Bloom has a nice summary of that work here.

Last week, the boss here at the Atlanta Fed gave the trout in the Snake River a break and made some observations on the economy to the Rocky Mountain Economic Summit, casting a line in the direction of economic uncertainties. Among his remarks, he noted that:

The minutes of the June FOMC [Federal Open Market Committee] meeting clearly pointed to uncertainty about employment momentum and the outcome of the vote in Britain as factors in the Committee's decision to keep policy unchanged. I supported that decision and gave weight to those two uncertainties in my thinking.

At the same time, I viewed both the implications of the June jobs report and the outcome of the Brexit vote as uncertainties with some resolution over a short time horizon. We've seen, now, that the vote outcome may be followed by a long tail of uncertainty of quite a different character.

But he followed that with something of a caution…

If uncertainty is a real causative factor in economic slowdowns, it needs to be better understood. Policymaking would be aided by better measurement tools. For example, it would help me as a policymaker if we had a firmer grip on the various channels through which uncertainty affects decision-making of economic actors.

I have been thinking about the different kinds of uncertainty we face. Often we policymakers grapple with uncertainty associated with discrete events. The passage of the event to a great extent resolves the uncertainty. The outcome of the Brexit referendum would be known by June 24. The interpretation of the May employment report would come clear, or clearer, with the arrival of the June employment report on July 8. I would contrast these examples of short-term, self-resolving uncertainty with long-term, persistent, chronic uncertainty such as that brought on by the Brexit referendum outcome.

As President Lockhart indicated in his speech, the Federal Reserve Bank of Atlanta conducts business surveys that attempt to measure the uncertainties that businesses face. From July 4 through July 8, we had a survey in the field with a question on how the Brexit referendum was influencing business decisions.

We asked firms to indicate how the outcome of the Brexit vote affected their sales growth outlook. Respondents could select a range of sentiments from "much more certain" to "much more uncertain."

Responses came from 244 firms representing a broad range of sectors and firm sizes, with roughly one-third indicating their sales growth outlook was "somewhat" or "much" more uncertain as a result of the vote (see the chart). Those noting heightened uncertainty were not concentrated in any one sector or firm-size category but represented a rather diverse group. 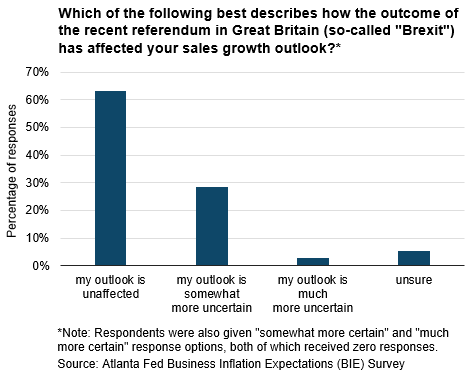 As President Lockhart noted in his speech, "[w]e had a spirited internal discussion of whether one-third is a big number or not-so-big." Ultimately, we decided that uncovering how these firms planned to act in light of their elevated uncertainty was the important focus.

In an open-ended, follow-up question, we then asked those whose sales growth outlook was more uncertain how their plans might change. We found that the most prevalent changes in planning were a reduction in capital spending and hiring. Many firms mentioned these two topics in tandem, as this rather succinct quote illustrates: "Slower hiring and lower capital spending." Our survey data, then, provide some support for the idea that uncertainties associated with Brexit were, in fact, weighing on firm investment and labor decisions.

Elevated measures of financial market and economic policy uncertainty immediately after the Brexit vote have abated somewhat over subsequent days. Once the "waters clear," as our boss would say, perhaps this will be the case for firms as well.

Approaching the Promised Land? Yes and No

Last Friday, we released our June installment of the Business Inflation Expectations (BIE) survey. Among the questions we put to our panel of businesses was a quarterly question on slack, asking firms to consider how their current sales levels compare to what they would consider normal.

The good news is, on average, the gap between firms' current unit sales levels and what they would consider normal sales levels continues to close (see the chart).

By our measure, firm sales, in the aggregate, are 1.9 percentage points below normal, a bit better than when we polled them in March (when they were 2.1 percent below normal) and much improved from this time last year (3.7 percent below normal). For comparison, the Congressional Budget Office's (CBO) estimate of slack on a real gross domestic product (GDP) basis was 2.6 percent in the first quarter (though this estimate will almost certainly be revised to something closer to 2.4 percent when the revised GDP estimates are reported later today). And if GDP growth this quarter comes in around 2.5 percent as economists generally expect, the CBO's GDP-based slack estimate will be 2.2 percent this quarter, just a shade larger than what our June survey data are saying.

Now, as we have emphasized frequently (for example, in macroblog posts in May 2015, February 2015, and June 2013), performance in the aggregate and performance within select firm groups can differ widely. For example, while small firms continue to have greater slack than larger firms, their pace of improvement has been much more rapid (see the table).

Likewise, some industries (such as transportation and finance) see current sales as better than normal. But others, like manufacturers, are currently reporting considerable slack—and findings from this group appear to show a marginal worsening in sales levels over the past 12 months.

Another item that caught our attention this month was the differing pace of narrowing in the sales gap among those firms with significant export exposure (greater than 20 percent of sales) relative to those with no direct export exposure. We connected these dots using responses to this month's special question, in which responding firms specified their share of customers by geographic area: local, regional (the Southeast, in our case), national, and international (see the table).

So things are still getting better for the economy overall, and the small firms in our panel have displayed particularly rapid improvement during the last year. But if you've got exposure to the "soft" export markets, as mentioned in the June 17 FOMC statement, you've likely experienced a slower pace of improvement.