Just in case you were inclined to drop the "dismal" from the "dismal science," Northwestern University professor Robert Gordon has been doing his best to talk you out of it. His most recent dose of glumness was offered up in a recent Wall Street Journal article that repeats an argument he has been making for a while now:

The growth of the past century wasn't built on manna from heaven. It resulted in large part from a remarkable set of inventions between 1875 and 1900...

This narrow time frame saw the introduction of running water and indoor plumbing, the greatest event in the history of female liberation, as women were freed from carrying literally tons of water each year. The telephone, phonograph, motion picture and radio also sprang into existence. The period after World War II saw another great spurt of invention, with the development of television, air conditioning, the jet plane and the interstate highway system…

Innovation continues apace today, and many of those developing and funding new technologies recoil with disbelief at my suggestion that we have left behind the era of truly important changes in our standard of living…

Gordon goes on to explain why he thinks potential growth-enhancing developments such as advances in healthcare, leaps in energy-production technologies, and 3-D printing are just not up to late-19th-century snuff in their capacity to better the lot of the average citizen. To paraphrase, your great-granddaddy's inventions beat the stuffing out of yours.

There has been a lot of commentary about Professor Gordon's body of work—just a few examples from the blogosphere include Paul Krugman, John Cochrane, Free Exchange (at The Economist), Gary Becker, and Thomas Edsall (who includes commentary from a collection of first-rate economists). Most of these posts note the current-day maladies that Gordon offers up to furrow the brow of the growth optimists. Among these are the following:

And inequality in America will continue to grow, driven by poor educational outcomes at the bottom and the rewards of globalization at the top, as American CEOs reap the benefits of multinational sales to emerging markets. From 1993 to 2008, income growth among the bottom 99% of earners was 0.5 points slower than the economy's overall growth rate.

Serious considerations, to be sure, but there is actually a chance that some of the "headwinds" that Gordon emphasizes are signs that something really big is afoot. In fact, Gordon's headwinds remind me of this passage, from a paper by economists Jeremy Greenwood and Mehmet Yorukoglu published about 15 years ago:

A simple story is told here that connects the rate of technological progress to the level of income inequality and productivity growth. The idea is this. Imagine that a leap in the state of technology occurs and that this jump is incarnated in new machines, such as information technologies. Suppose that the adoption of new technologies involves a significant cost in terms of learning and that skilled labor has an advantage at learning. Then the advance in technology will be associated with an increase in the demand for skill needed to implement it. Hence the skill premium will rise and income inequality will widen. In the early phases the new technologies may not be operated efficiently due to a dearth of experience. Productivity growth may appear to stall as the economy undertakes the (unmeasured) investment in knowledge needed to get the new technologies running closer to their full potential. The coincidence of rapid technological change, widening inequality, and a slowdown in productivity growth is not without precedence in economic history.

Greenwood and Yorukoglu go on to assess, in detail, how durable-goods prices, inequality, and productivity actually behaved in the first and second industrial revolutions. They conclude that game-changing technologies have, in history, been initially associated with falling capital prices, rising inequality, and falling productivity. Here is a representative chart, depicting the period (which was rich with technological advance) leading up to Gordon's (undeniably) golden age: 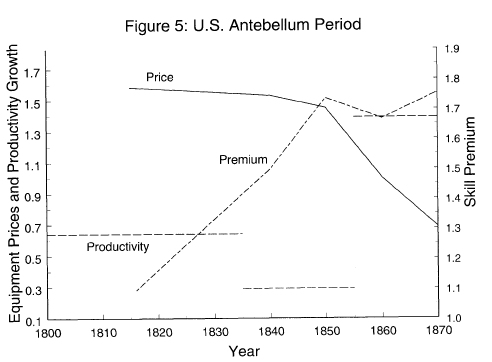 Greenwood and Yorukoglu conclude their study with this pointed question:

Plunging prices for new technologies, a surge in wage inequality, and a slump in the advance of labor productivity - could all this be the hallmark of the dawn of an industrial revolution? Just as the steam engine shook 18th-century England, and electricity rattled 19th-century America, are information technologies now rocking the 20th-century economy?

I don't know (and nobody knows) if the dark-before-the-dawn possibility described by Greenwood and Yorukoglu is the apt analogy for where the U.S. (and global) economy sits today. (Update: Clark Nardinelli also discussed this notion.) But I will bet you there was some commentator writing in 1870 who sounded an awful lot like Professor Gordon.

By Dave Altig, executive vice president and research director of the Atlanta Fed