Will the Federal Open Market Committee's (FOMC) current large-scale asset purchase program, so-called QE3, continue to melt away as spring arrives? The release of the minutes from the January meeting of the FOMC, along with commentary from various participants in that meeting (noted in rapid succession here, here, and here, for example) have left the distinct impression that the answer is most probably yes.

The anticipated winding down of asset purchases almost inevitably invokes a habit of language concerning what it all means for the stance of monetary policy. From the New York Times, for example, we have this (emphasis added):

When Federal Reserve officials last met at the end of January, they were surprised by the strength of the economy, cheered by the optimism of consumers and convinced they should continue to dismantle the Fed's economic stimulus campaign, according to an account the Fed released Wednesday.

The sentiment expressed in that highlighted passage is front and center at the G-20 meetings, currently taking place in Australia (again, emphasis added):

Setting the scene for this weekend's Group of 20 meetings, Australian Treasurer Joe Hockey's main challenge was to avoid appearing partial in the escalating blame-game between the U.S. and developing countries over the recent exodus of capital from emerging markets….

Emerging market countries like India and Brazil have blamed the wide-scale selloff in local stocks, bonds and currencies on the Federal Reserve's plan to exit gradually from monetary-stimulus policies, which last year began sending investors into a panic.

Here's the thing. It is not at all clear that winding down asset purchases means an exit from or dismantling of monetary stimulus, gradual or otherwise. In Atlanta Fed President Dennis Lockhart's words yesterday:

In our public remarks over much of last year, my colleagues and I stressed a couple of very important messages. First, even with the phase-out of asset purchases, the basic stance of policy remains highly accommodative. To translate, the Committee intends to keep interest rates very low. The second message was that the QE program and the Fed's policy interest-rate target are two separate tools of policy. Consequently, we can wind down the asset purchases—a program that was meant to provide temporary, supplemental "oomph" to the low interest-rate policy—and preserve the accommodative positioning of policy appropriate for the reality of our economic situation.

But those are not just words. Several months back, Jim Hamilton publicized the work of Cynthia Wu and Dora Xia (former and current students of his), who have developed a method of using term structure data to infer the "shadow," or implicit, monetary policy rate. (Follow-up posts appeared thereafter at Econbrowser—here and here—and from the crew here at macroblog.)

Just recently, the Wu-Xia data has been updated, giving us a first glance at the post-taper shadow policy rate (see the chart):

Both Treasury yields and the shadow policy rate did in fact spike last June following then-Chairman Ben Bernanke's post-FOMC press conference, wherein he signaled that the asset-purchase taper was indeed on the table. But he also made the point that bringing down the QE pillar of the Fed's policy mix is decidedly not the same thing as bringing monetary stimulus to an end, a message that was subsequently emphasized by Fed officials many times, in many forums.

Though financial market participants may have been convinced that the taper meant tightening initially, it does appear that communications and forward guidance have done the trick of more than reversing that initial impression. At the very least, the Wu-Xia calculations are consistent with that interpretation.

A Second Look at the Employment-to-Population Ratio

This analysis is a companion piece to my Atlanta Fed colleague John Robertson's recent macroblog post. John's blog highlighted some findings of a recent New York Fed study by Samuel Kapon and Joseph Tracy on the employment-to-population (E/P) ratio. Their work has received considerable attention in the media and blogosphere (for example, here, here, and here). Kapon and Tracy's final chart (reproduced below) has received particular scrutiny.

The blue line represents the authors' estimate of the demographically adjusted E/P ratio purged of business-cycle effects. This line can be thought of as "trend." The chart shows that as of November 2013, the E/P ratio was only –0.7 percentage point below trend. Was the "gap" between actual and trend E/P really this small?

Attempting to answer this question requires digging into the details of Kapon and Tracy's method for estimating trend. One key excerpt is the following:

This methodology seems reasonable since one might typically expect business cycle effects to average out over 30 years. However, the 1982–2013 sample period is somewhat unusual in that the unemployment rate was elevated at both the starting and ending points. 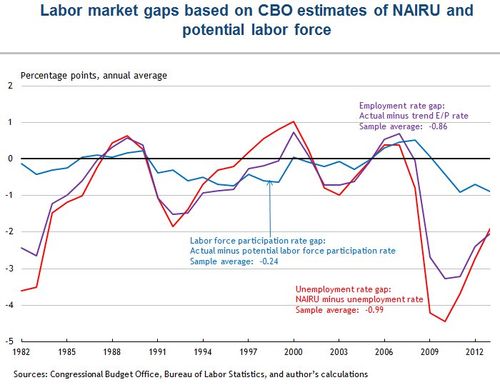 On average, the trend E/P ratio is below the actual rate by 0.86 percentage point. If one were to normalize the Kapon and Tracy E/P trend so that its average value was equal to CBO's trend, then the November 2013 E/P gap is about 1.5 percentage points. Whether or not the CBO estimate is the right benchmark is a matter of taste. CBO's recent estimate of NAIRU in the fourth quarter of 2013—5.5 percent—is lower than the 6 percent median estimate from the Survey of Professional Forecasters in the third quarter of 2013.

A second, more subtle issue in the Kapon and Tracy analysis is their treatment of cohorts:

A well-known 2006 Brookings paper by Stephanie Aaronson and other Fed economists modeled trend labor force participation rate(LFPR) using birth-year cohorts. With estimates of trend LFPR and NAIRU, we can back out a trend E/P ratio. The chart below, adapted from Aaronson et al., plots age-group LFPRs against birth year. 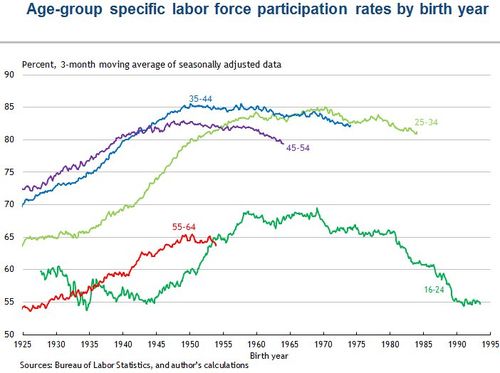 We see that successive birth-year cohorts born between 1925 and 1950 had steadily increasing labor force attachment. Attachment for more recently born cohorts has leveled off and even declined slightly. People born in the 1990s have very low labor force attachment by historical standards. The inclusion of the "1990s—decade of birth" dummy variable in the Kapon and Tracy research probably implies that their model is interpreting much of this decline as structural. However, an alternative interpretation is that the decline is cyclical, because persons born after 1990 have been in an environment of high unemployment for most of their short working lives.

To gauge the sensitivity of trend or structural LFPR to how the youngest cohorts are treated, I used a stripped-down version of a model similar to Aaronson et al. Monthly LFPRs are modeled as a function of age, sex, birth date, and the CBO's estimate of the output gap during the January 1981 to January 2014 period. Time series published by the U.S. Bureau of Labor Statistics for 30 different age-sex cells are used so that the regression has 11,550 observations. Structural LFPR is constructed with the fitted values of the regression with a value of 0 percent for the output gap at all points in time. The trend E/P ratio is then backed out with the CBO's estimate of NAIRU.

The model is run with two different assumptions: First, following the approach of Aaronson et al., people born after 1986 have the same birth-year cohort effects as those born in December 1986. Second, no constraints are placed on birth-year cohort effects. Trend values of LFPR and E/P (taking on board the CBO's NAIRU) are plotted in the two charts below: 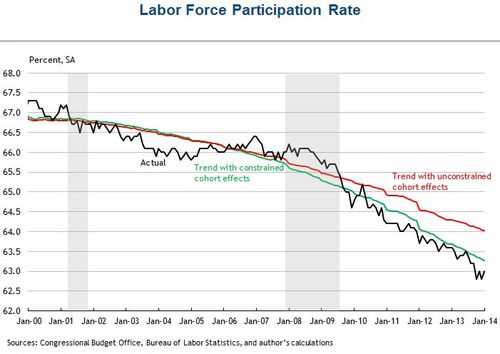 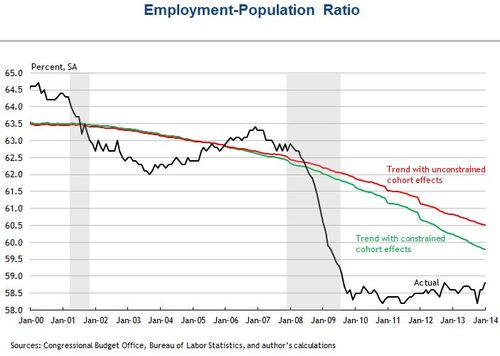 It is important to control for changing demographic factors when looking at the behavior of the E/P ratio over time. This step is particularly important today when these demographic factors are exerting downward pressure on the actual E/P rate, suggesting that the recent lack of improvement in the E/P ratio does not imply a lack of progress in the labor market. The adjusted E/P rate corroborates the basic picture from the unemployment rate that the labor market has been recovering over the past few years, but that it still has a ways to go to reach a full recovery.

Inflation versus Price-Level Targeting in Practice

In last Wednesday's Financial Times, Scott Sumner issued a familiar indictment of "modern central banking practice" for failing to adopt nominal gross domestic product (GDP) targets, for which he has been a major proponent. We have expressed doubts about nominal GDP targeting on several occasions—most recently a few posts back—so there is no need to rehash them. But this passage from Professor Sumner's article provoked our interest:

Inflation targeting also failed because it targeted the growth rate of prices, not the level. When prices fell in the U.S. in 2009, the Federal Reserve did not try to make up for that shortfall with above target inflation. Instead it followed a "let bygones be bygones" approach.

In principle, there is no reason why a central bank consistently pursuing an inflation target can't deliver the same outcomes as one that specifically and explicitly operates with a price-level target. Misses with respect to targeted inflation need not be biased in one direction or another if the central bank is truly delivering on an average inflation rate consistent with its stated objective.

So how does the Federal Reserve—with a stated 2-percent inflation objective—measure up against a price-level targeting standard? The answer to that question is not so straightforward because, by definition, a price-level target has to be measured relative to some starting point. To illustrate this concept, and to provide some sense of how the Fed would measure up relative to a hypothetical price-level objective, we constructed the following chart.

Consider the first point on the graph, corresponding to the year 1993. (We somewhat arbitrarily chose 1993 as roughly the beginning of an era in which the Fed, intentionally or not, began operating as if it had an implicit long-run inflation target of about 2 percent.) This point on the graph answers the following question:

By what percent would the actual level of the personal consumption expenditure price index differ from a price-level target that grew by 2 percent per year beginning in 1993?

The succeeding points in the chart answer that same question for the years 1994 through 2009.

Here's the story as we see it:

We're generally sympathetic to the idea of price-level targeting, and we believe that an effective inflation-targeting regime would not "let bygones be bygones" in the long run. We also believe that the Federal Open Market Committee (FOMC) has effectively implemented the equivalent price-level target outcomes via its flexible inflation-targeting approach over the past 15 to 20 years (as suggested in point number 1 above).

In fact, the FOMC has found ample scope for stimulus in the context of that flexible inflation targeting approach (which honors the requirements of the Fed's dual mandate of price stability and maximum employment). We just don't think it is necessary or helpful to recalibrate an existing implicit price-level target by restarting history yesterday.

By Dave Altig, executive vice president and research director and

Mike Bryan, vice president and senior economist, both of the Atlanta Fed

I have precisely zero interest in jumping into any fray from the before and after of Wednesday's Wall Street Journal opinion piece by Jack Welch, wherein he defends his previous comments on the reliability of reported unemployment statistics. But there is one particular statement in that editorial that offers up what is sometimes called a teachable moment, to wit,

By definition, fewer people in the workforce leads to better unemployment numbers.

Hope that clears it up.

Note: You can take a look some actual data on flows into and out of employment, unemployment, and not in the labor force here.