Grants for Community and Economic Development

Local community and economic development (CED) depends on a combination of public and private funding. Grant dollars are an important source of funding for initiatives that create better-paying jobs and infrastructure to support revitalization, affordable housing, or improved systems for education or health care. The Federal Reserve Banks of Atlanta and Philadelphia's recent analysis of foundation grants for community and economic development

found the geographic distribution of grant funding is highly uneven. On a per capita basis, grant dollars flow to some metro areas much more readily than to others.

This tool allows users to explore data on grant funding for community and economic development from a variety of sources. Click on the How-to Videos button below for instructions on how to use the tool and for a demonstration of how the data may be used.

Use the check boxes and slider menu to select metro areas and year of grant making to explore. Move cursor over list of metro areas to reveal a magnifying glass search button. The map and charts will automatically update based on your selections.

The previous version of Following the Money allowed users to explore data on grants from large foundations. Based on feedback from a variety of community partners, we updated the Foundation Center data to 2014 and added several new sources of grant funding to the explorer tool. Users may now explore data on grants that support community and economic development from large foundations, from national intermediaries, and from key programs at the U.S. Department of Housing and Urban Development (HUD).

Large foundation grants
Data on grants and grant volume from large foundations originate from the Foundation Center's FC1000 data set, which includes grants of at least $10,000 made by the 1,000 largest foundations for each year from 2009 to 2014. To select grants specifically for CED projects and organizations, we parsed the grant or recipient subject for 122 relevant philanthropy classification codes and analyzed the description of a grant to ensure relevancy. We also sought to include only grants that were deployed within the recipient's metro area to improve local conditions; as such, we exclude grants to recipients with service areas extending beyond the borders of their metro area as well as grants used to fund research. We've also taken care to exclude grants to various national intermediaries, described below, so we do not double-count grant funds to communities from philanthropic sources. The tool includes almost 206,000 CED related grants from large foundations, totaling almost $20 billion in grant volume over the period 2009 to 2014.

U.S. Housing and Urban Development (HUD) grants
Data on HUD programs including the Community Development Block Grant (CDBG), HOME Investment Partnerships Program (HOME), and the Neighborhood Stabilization Program (NSP) grants for 2009 through 2014 are from HUD Exchange. We built a crosswalk to link grants to individual grantees (including local governments, nonprofit and for-profit organizations, public housing authorities, and tribal entities) to their respective metro areas. We exclude from the analysis NSP grants to organizations whose service area either exceeded one metro area or where this area was unclear. We also exclude CDBG grants awarded to state agencies for further distribution around the state. The CDBG grants displayed in the tool aggregate to some $13.6 billion, HOME grants to almost $4.9 billion, and NSP grants to just under $3.8 billion over the period 2009 to 2014. 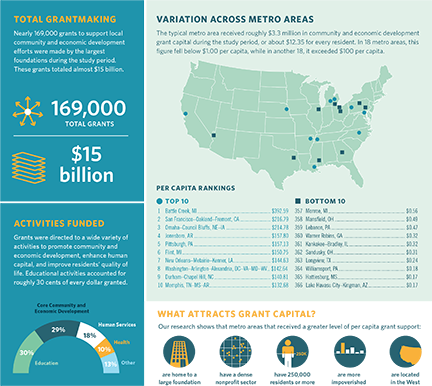 Read the accompanying article for Following the Money as it appeared in volume 8, issue 3 of The Foundation Review. 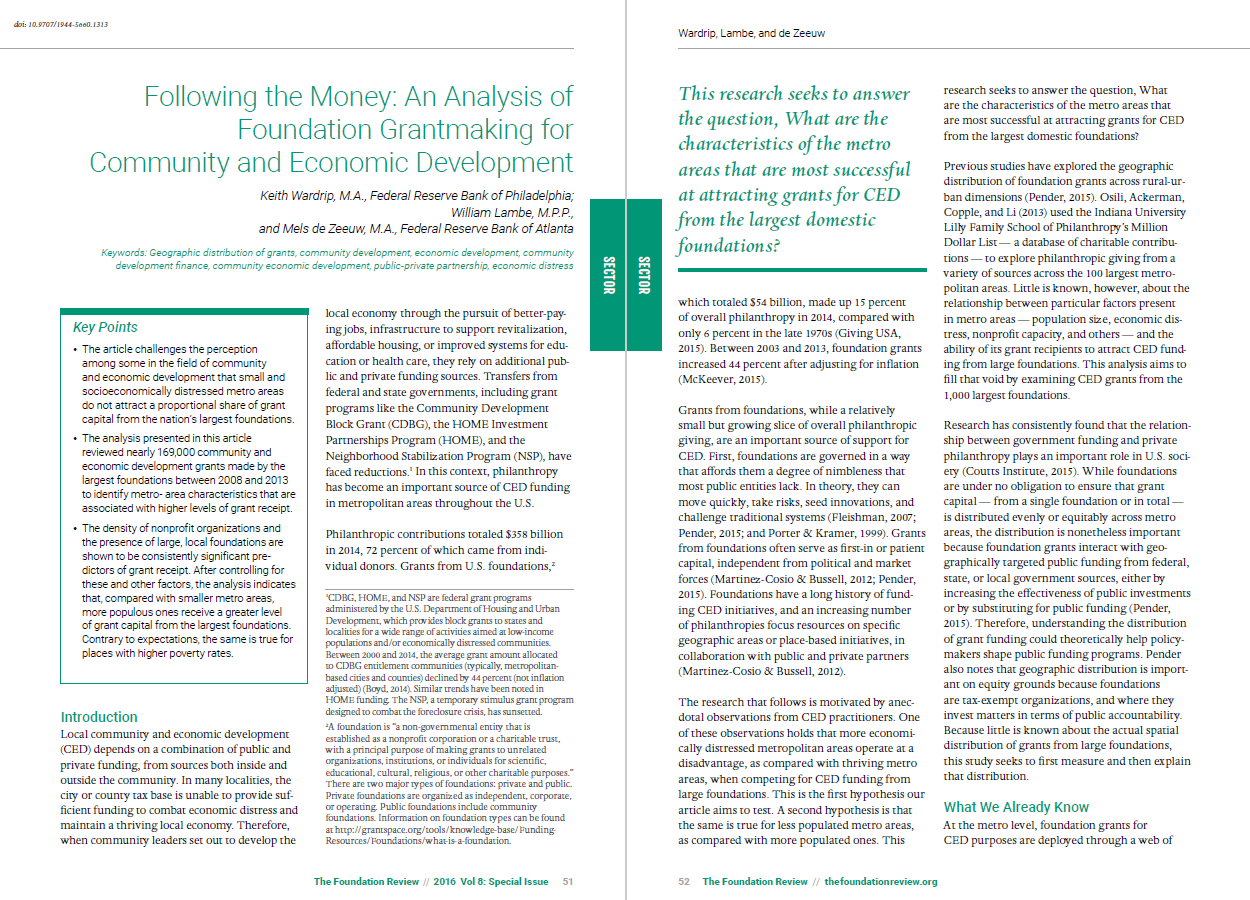