Data from the Current Population Survey

tell us that, in the second quarter of 2019, 47.8 percent of those aged 55 and older said they didn't want a job because they were retired. By the second quarter of 2021, that share had risen more than 2 percentage points, to 49.9 percent, which is an increase of around 2 million retirees over what would have been expected if the retirement rate for those aged 55 and older had not changed.

These data raise the question of how much of the increase in retirements is over and above what would have been expected based on the ongoing aging of the baby boomer generation—the movement of more people into ages that are more likely to retire. In other words, did the COVID-19 pandemic contribute to an increase in retirements?

The Atlanta Fed's Labor Force Participation Dynamics tool, which we recently updated with data through the second quarter of 2021, allows us to investigate the source of the change in retirement. The increase in the overall retirement rate for those aged 55 and older can be broken into two parts. The first one is the part due to a shift in the distribution of age, sex, race/ethnicity, and educational attainment toward demographics with higher retirement rates. For example, a 65-year-old is more likely to retire than a 63-year-old, and we have more 65-year-old people today than two years ago. The second part is the increase due to higher retirement rates within the age, sex, race/ethnicity, and educational attainment groups.

To illustrate how the decomposition works, let's look at just two factors: age and sex. The following table shows the average retirement rates of men and women aged 55 and older by five-year age groups for the second quarters of 2019 and 2021. The numbers in parentheses show the share of the 55-and-older population in each age/gender group. For example, in the second quarter of 2019, 51.5 percent of women 55 and older were retired, and women made up 53.7 percent of the overall population of people 55 and older.

Chart 1 displays the results of the complete decomposition. The blue line is year-over-year change in the retirement rate of those 55 and older going back to the second quarter of 2006. The orange bars represent the part of the change in the overall retirement rate accounted for by changes in the demographic composition (the distribution of age, sex, race/ethnicity, and educational attainment), while the green bars depict the contribution to the overall change from changes in retirement rates within the demographic groups (labeled as behavior). 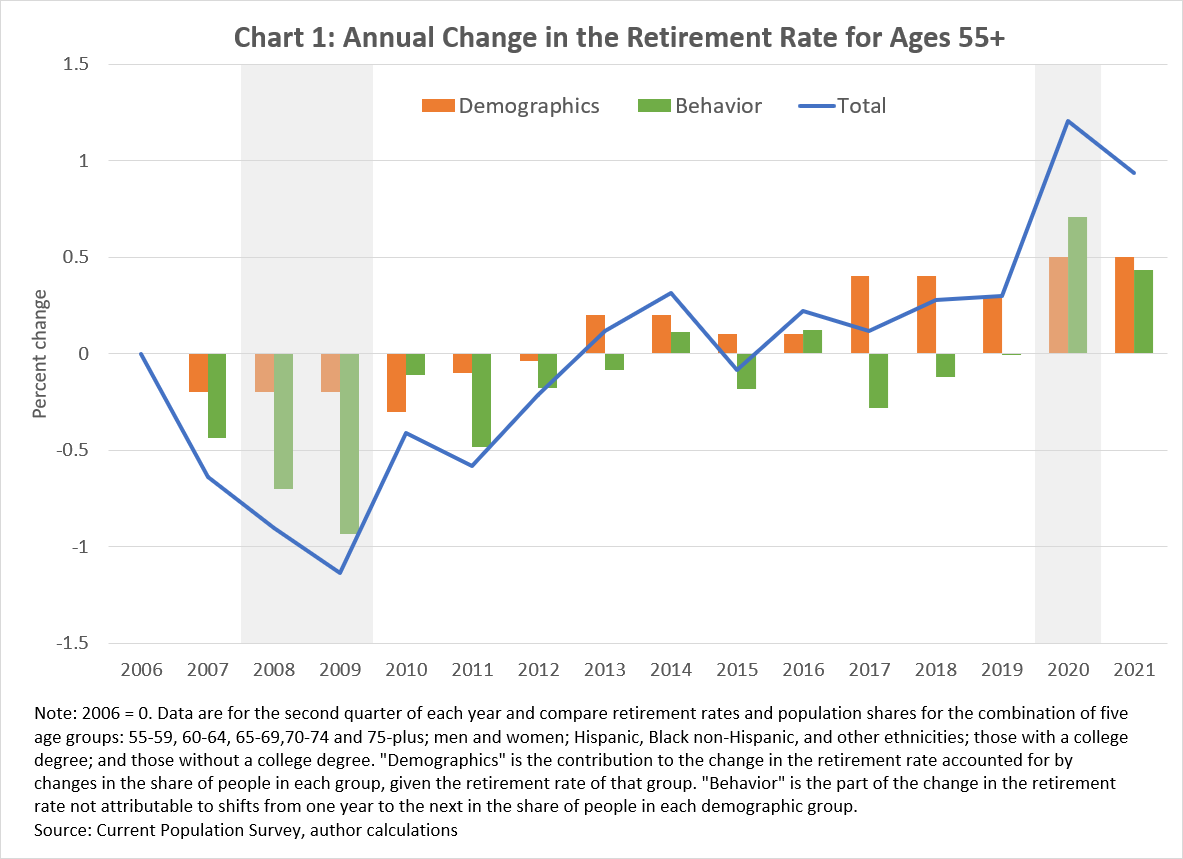 Notice that up until 2020, behavioral changes were generally contributing to lowering the overall retirement rate of the 55-and-older population. The loss of retirement savings during the Great Recession was arguably an important factor in reducing the ability to retire during that period. At the same time, demographics were also putting mild downward pressure on retirement, with the leading edge of the baby boomer generation still within an age range with relatively low retirement rates. However, since 2013 underlying demographic shifts have been putting upward pressure on the overall retirement rate.

During the COVID-19 pandemic, demographic and behavioral factors appear to have contributed roughly equally to the rise in retirements. Perhaps, for some baby boomers who were already likely to retire within a few years, the pandemic created an incentive to retire sooner than they might have otherwise. A look at the Federal Reserve's Distributional Financial Accounts Overview

shows that the annual growth in the net worth of those 55 and older now puts them, on average, in a much better financial position to retire than was the case during the Great Recession (see chart 2). 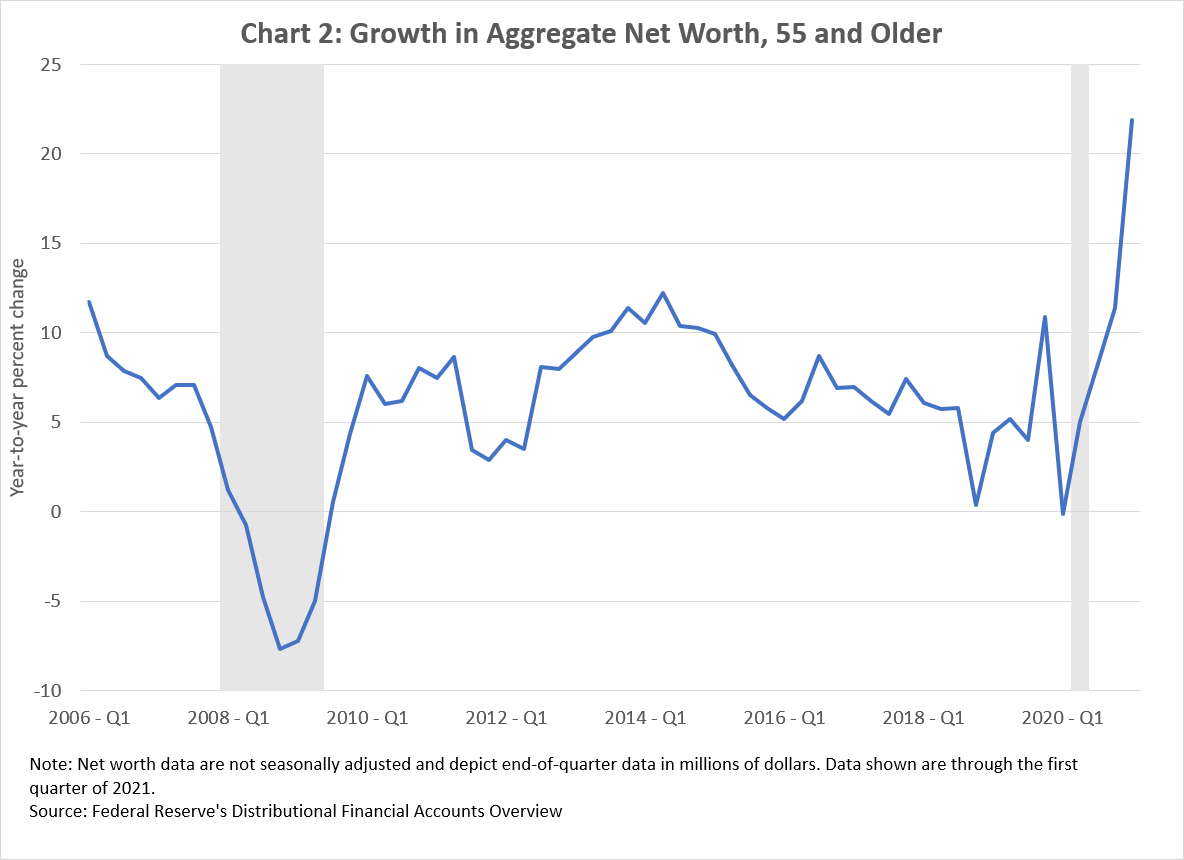 The ongoing aging of the baby boomer generation will continue to put upward pressure on the retirement rate over the next few years. How much the recent behavioral change will persist is much less clear, and a great deal will undoubtedly depend on the future path of the pandemic and the financial resources of older Americans. The Atlanta Fed's Labor Force Participation Dynamics tool will allow you to investigate the changes for yourself—with data for the third quarter of 2021 available sometime in October—but I'll be back to discuss my own findings with you here.