Taking the Pulse of Firm Optimism

Tom Heintjes: Welcome to another Economy Matters podcast. I'm Tom Heintjes, managing editor of the Atlanta Fed's Economy Matters magazine, and today, we're joined by Nick Parker, survey director here at the Atlanta Fed. Today we're going to be discussing the results of some recent surveys Nick conducted that in part delved into how optimistic firms feel—especially around the time of presidential transitions. Nick, thanks for joining us today.

Nick Parker: Hi, Tom—thanks for having me. 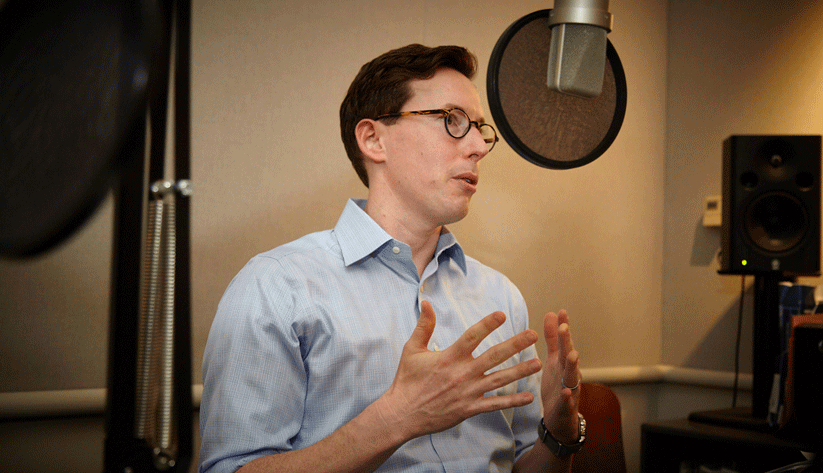 Nick Parker at the recording of this episode

Heintjes: Nick, I'm going to start off by asking you, historically speaking, how optimistic are firms at times of transitions of presidential administrations?

Parker: Well, our measure only covers this past election—the 2016 election—but if you look back at the Duke CFO Global Business Outlook Survey, which is the survey where we got our optimism questions, they cover a couple more presidential election periods. And you definitely can see a change in optimism around the 2008 election. There was a pretty decent decline in comparison to quarter-over-quarter changes that they've had in the past. That's 2008, and we were in a recession, so there are many things that could have caused that change in optimism, not necessarily the presidential election or the outcome. And then, if you look at maybe the more recent 2012 election, there really wasn't much of a change at all.

Heintjes: What causes firms to become more or less optimistic during these turning points? Is it in part psychological, or do business owners see historical trends that lead them to feel a certain way at these times?

Parker: I can't say much about prior instances, but in the case of the 2016 election some firms anticipated a reduction in regulation, some tax reform, infrastructure spending, even health care reform, to some extent.

Heintjes: All the things we heard a lot about.

Parker: Yes, absolutely. And so you can imagine that all those things can have an impact on the costs that firms face, and if there's any promise of a reduction in those costs, that's some reason for optimism. Anecdotally, we have some evidence that that's true, but I can't say for certain those are the only reasons.

Heintjes: : Nick, describe for us briefly the survey you used to take the temperature of firm optimism.

Parker: The business inflation expectations survey is a survey of the Sixth District—the Southeast, basically, the Sixth District Federal Reserve—that we've fielded since October of 2011. Essentially it's a survey that's meant to measure the current business environment that firms face and then their expectations for unit cost change over the year ahead. This survey also has a unique feature: a special question series where we can insert policy-relevant questions and try to get some more timely feedback on those issues. The special question series is where we put these optimism questions.

Heintjes: Right. Well, I know when we're discussing survey data it's easy to get lost in the weeds, and I don't want to do that here. But when you drill down into the data that you collected, did you see anything especially interesting or noteworthy in respondents' feedback?

Parker: Well, I think the thing that I would highlight the most is the uniformity of their optimism, the...

Parker: Small firms, large firms—firms from every sector had a relatively more optimistic outlook. It's become more optimistic over time. Since the November measure was our initial measure and we had one just last May, and there was an elevation of optimism. and it's been sustained. So, who knows when that might change, but it was pretty remarkable that it happened for everyone and it's stayed the same for everyone.

Heintjes: Sure, that is interesting. Nick, you mentioned the special question in this survey before. Could you elaborate a little further on the business inflation expectations setup that you used to conduct the survey?

Parker: Yes. It's a monthly survey. It's firms—every sector except for government and agriculture—and firms that run the gamut from owner-operators all the way up to Fortune 500 companies. We're pretty happy with the mix of firms and the firm size makeup as well, and these are also just firms here in our district, in the Southeast.

Heintjes: So that survey focuses on inflation expectations, but the special question is a way to leverage the survey to get maybe a different snapshot, a different type of look at a subject?

Parker: Absolutely. Frequently, Raphael [Bostic, Atlanta Fed president] or past presidents would have a policy issue of the moment that they are interested in exploring. And this special question series allows us to get very timely responses to those types of questions so that we can hope to provide some sort of insight—either a complement to government statistics, or just sort of picking the brains of firms to find out what issues are most relevant to them.

Heintjes: Right. You mentioned some anecdotal information. I'm going to ask you, Nick, have we seen evidence of firm optimism that takes more tangible form? Say, increased business investment, robust hiring, and so forth? How does this optimism typically manifest itself, or do we see it now?

Parker: That is the million dollar question, as they say. [laughter] We haven't had enough data come out to really make any determinations in that regard, and we certainly would probably have to measure optimism over a much longer period of time to make any assertions in that regard. But we're hoping for the best. We're hoping it translates into economic growth.

Heintjes: Right. Well, I will infer that you've just invited yourself back on to the podcast in the future, so we can follow up on that. So will you be checking firm optimism again in a future survey? Is that among your plans?

Parker: Yes, definitely. We'll come back to that question from time to time to see how sustainable it is, or if it remains at this sort of higher level without much change, and see what factors maybe could have influenced it to either increase or decrease over time.

Heintjes: If someone listening to this podcast episode wants to take part in a future survey, how would they go about participating?

Parker: If someone wants to become a member of our survey panel, they can visit the Atlanta Fed website—it's frbatlanta.org—and if they look under the Research tab, go to Inflation Project, and under the Inflation Project there should be a link for participation.

Heintjes: And how many different surveys do you conduct that are among the choices there?

Parker: Currently only the business inflation expectations survey is on our website where we're publishing data, but we have another national survey that we're developing with researchers at Stanford and the University of Chicago that will be published sometime this year.

Heintjes: Great. Well, Nick, I want to thank you for coming into the studio and sharing your insights with us. We'll have to do this again, like I mentioned, to see how things look a bit down the road.

Parker: Thanks, Tom, it was my pleasure. I look forward to it.

Heintjes: As Nick mentioned, you can participate in future Atlanta Fed surveys. We have a number of data series, anything from home building to small business issues. And like Nick just said, if you go to frbatlanta.org, then go to Research and Data and select the Inflation Project, you'll see a link to participate in our survey there—and we would certainly welcome your participation.

And that brings us to the end of another Economy Matters podcast episode. As always, thanks for making time for us, and I hope you'll be back next month when we'll sit down with Atlanta Fed economist Melinda Pitts, when we'll discuss her research into the economics of health care—a very timely topic, of course. I guarantee it will be a different kind of discussion from what you typically hear, so be sure to be back next month, and thanks again for listening.