In a recent macroblog post [http://macroblog.typepad.com/macroblog/2008/12/the-recession-i.html], Dave Altig described the employment patterns in the current U.S. recession relative to the average recessionary experience. Dave made some observations from the data supported, in part, by a similar chart to the one produced below:

Before the November job report, the overall employment picture had been fairly unexceptional compared with the average recessionary experience. That comparison changed, as I guess will happen when a half-million job loss statistic arrives. As of today, a milder-than-average recession has turned into a somewhat deeper-than-average recession, at least in terms of employment. Assuming that we remained in recession through November—and I don’t think that conjecture will draw much debate—the current episode is already a year in duration. A more apt comparison might therefore be the “bad” recessions of recent memory, the 1973–75 and 1981–82 episodes, both of which lasted 16 months. 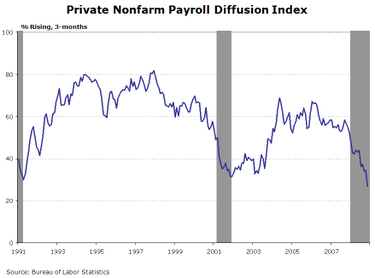 Another diffusion index (for which there is a longer data history) comes from the industrial production data (shown below). A total of 255 component industries are measured in this index. Here, the three-month diffusion measure hit 23.7 percent in November. This “breadth” of production decline is greater than what we saw in the previous two recessions and is more on par with the “bad” recessions of 1973–75 and 1981–82. These indicators of the scope of the economic downturn would seem to confirm a point Dave made in his earlier post, that “the [more severe] recessions of 1973–75 and 1981–82 are almost certainly more sensible comparisons [to the current recessionary experience] at this point.” 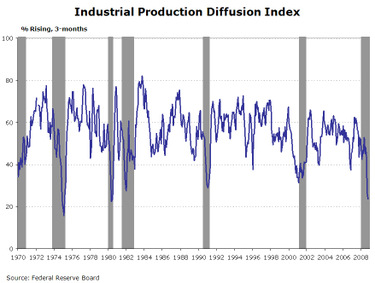 So, while the magnitudes of the employment and production declines are near their postwar averages, the recent data appear to show a clear acceleration in the pace of the decline. Given the length of the recession to date, the current recession experience is approaching the more extreme postwar recessions in terms of its length. To this we would add the following—that the breadth of the current downturn, at least in terms of employment and production, would also seem to be on par with those more virulent episodes.