Comparisons can be useful in determining where the economy is at any given point in time, and today's Employment Situation report from the U.S. Bureau of Labor Statistics provides another opportunity to do just that. According to that report, the U.S. economy added 243,000 nonfarm payroll jobs in January 2012. But total nonfarm employment is still 5.6 million lower than at the start of the last recession (December 2007).

Considering everything, there is both good news and bad news in the labor market today.

Chart 1 compares the year-over-year employment growth among industries that experienced below-median and above-median job loss, as well as those industries in the 75th and 25th percentiles of job loss. That chart also shows another potential bit of good news—that is, in spite of the dramatic differences in job losses, all four categories of industries are currently adding jobs at about the same rate. And that overall job growth, at about 0.24 percent per month, is roughly the same as the average monthly job growth seen between 1993 and 2000 and exceeds the average monthly growth before the recession, from 2004 through 2007.

Still, there is more bad news. At the current rate of growth, those industries that experienced above-median job loss during the recession will not regain prerecession employment levels until the end of 2015. 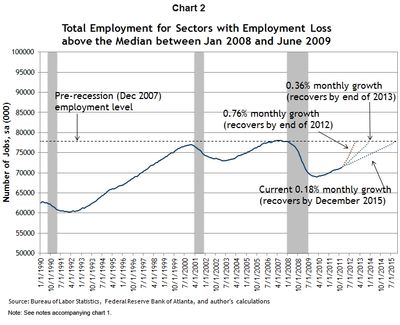 Does the projected labored employment recovery among these particularly hard-hit industries suggest there are more serious structural impediments to the efficient operation of the labor market today than there were after the previous two recessions? Several posts on this blog (here and here, for example) have addressed this question of structural change without coming to a definitive answer. Returning to chart 1 gives us yet another opportunity to speculate on this point.

Note that the category in chart 1 into which each three-digit industry is placed (above-median or below-median job loss, etc.) is based on job losses between January 2008 and June 2009. Plotting the annual growth rates back to 1990 illustrates that the industries that were hardest hit during the most recent recession were also those with the greatest job losses during the previous two recessions. So there appears to be nothing special about these industries that led to their suffering during the most recent recession.

Additionally, the pattern of recovery of these hardest-hit industries is similar to that experienced after the previous two recessions. Like before, the worst performing industries (those with job losses in the 75th percentile) are adding jobs at a faster rate than industries that did not suffer as much. Industries in the 75th percentile of job losses added jobs in 2011 at an average monthly rate of 0.22 percent; industries with below-median losses added jobs at an average monthly rate of 0.12 percent. This analysis does not suggest to me that unique structural features of this recession or recovery are holding employment growth back—it appears that the culprit is simply the extraordinarily deep hole the economy, and thus the job market, fell into this time around. The bad news, then, is that time may be the only answer for those industries to fully recover.

By Julie Hotchkiss, a research economist and policy adviser in the Atlanta Fed's research department