Deflation Probabilities on Our Radar Screen

In the latest Wall Street Journal Economic Forecasting Survey, conducted August 3–6, economists were asked whether they "expect[ed] the Fed to start another round of large-scale bond buying in 2012?" Sixty-three percent answered yes, and 49 percent expected a program would be announced in September, presumably at the end of the next meeting of the Federal Open Market Committee (FOMC) on September 12–13. Obviously this question is of interest to more than just business economists. For example, at his July 17 testimony before the Senate Committee on Banking, Housing, and Urban Affairs, Sen. Mike Crapo asked Fed Chairman Ben Bernanke whether the FOMC should seriously consider more quantitative easing going forward. As part of his response, the Chairman said that "we would certainly want to react against any increase in deflation risk." The entire video exchange can be viewed at the 52–55 minute mark here.

As part of the Atlanta Fed's Inflation Project, we regularly update probabilities of deflation in the Consumer Price Index (CPI) estimated from Treasury Inflation-Protected Securities (TIPS) prices, described here and here. The basic idea is that a recently issued 5-year TIPS has less "deflation protection" than a 10-year TIPS maturing about the same date as the 5-year TIPS. The yield spread between the 5-year TIPS and 10-year TIPS can be used to help estimate the probability of deflation.

The most recent (August 8) estimate puts the 5-year probability of deflation from early 2012 to early 2017 at around 15 percent. As seen in the figure below this probability is up slightly from May, but only about half the readings of the 5-year (2010–15) deflation probability seen in the late summer and early fall of 2010 and considerably below readings seen during the height of the financial crisis in late 2008 and early 2009.

It is important to note that these deflation probabilities are estimates based on a relatively simple model that uses a number of assumptions that not everyone may agree on. Jens Christensen, Jose Lopez, and Glenn Rudebusch at the Federal Reserve Bank of San Francisco have built an alternative model for estimating deflation probabilities that also uses TIPS yields. At the time of the publication of their paper in 2011, their model's probabilities were somewhat lower than—but highly correlated with—ours.

The TIPS market has a number of features that make inferring both inflation expectations and deflation probabilities from them tricky. Most notably, there are unknown liquidity differences between TIPS and nominal Treasury securities. A more direct way of estimating deflation probabilities—or in fact the entire probability distribution of future CPI inflation—using so-called inflation caps and floors has recently been explored by economists Yuriy Kitsul and Jonathan Wright. Inflation caps and floors are essentially options on the Consumer Price Index. We used the Kitsul and Wright method for constructing the implied probabilities of (annualized) CPI inflation over the next five years. As seen in the figure below, this method implies a 13 percent probability that inflation will be 0 percent or negative on average over the next five years. This probability is about at the midpoint of the range that prevailed between October 2009 and March 2012. (See figure 3, on page 29 of Kitsul and Wright's working paper.) 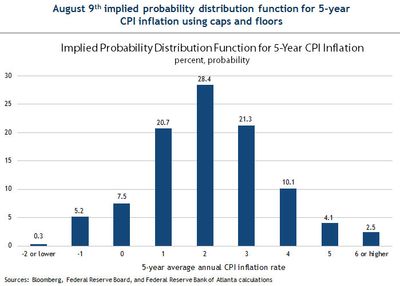 As Kitsul and Wright explain, the market for inflation caps and floors is still quite small relative to the TIPS market. So the deflation probabilities from their model should be considered suggestive, as should our own.

What's the takeaway from all this? Well, readings from the financial market indicate the likelihood of a sustained deflation is currently about 15 percent, or a bit less. That's up from earlier in the year, but not nearly as high as in 2010.

Should we be concerned about the prospect for deflation in the years ahead? This is obviously an important policy question. But I'm not a policymaker; I merely put up the numbers for you to consider. And, of course, we will continue to follow these indicators closely—as can you. Our deflation probability estimates are updated every Thursday and posted on our Inflation Project.

By Patrick Higgins, an economist in the Atlanta Fed's research department