A good time for price-level targeting?

Though the idea arises periodically, interest in price-level targeting is a hot topic again thanks to recent comments from Federal Reserve Bank of Chicago President Charles Evans. The essence of Evans's approach (and described in his own words) is this:

"If the Federal Reserve decided to increase the degree of policy accommodation today, two avenues could be: 1) additional large-scale asset purchases, and 2) a communication that policy rates will remain at zero for longer than ‘an extended period.'

"A third and complementary policy tool would be to announce that, given the current liquidity trap conditions, monetary policy would seek to target a path for the price level. Simply stated, a price-level target is a path for the price level that the central bank should strive to hit within a reasonable period of time. For example, if the slope of the price path, which I will refer to as P*, is 2 percent and inflation has been underrunning the path for some time, monetary policy would strive to catch up to the path: Inflation would be higher than 2 percent for a time until the path was reattained. I refer to this as a state-contingent policy because the price-level targeting regime is only intended for the duration of the liquidity trap episode."

The challenge presented by short-term interest rates near zero is one clear motivation for this policy proposal. Again, from President Evans:

By allowing inflation that is "higher than 2 percent for a time," inflation-adjusted short-term interest rates would fall, presumably moving real interest rate close to their market-clearing levels.

President Evans contemplates implementing the price-level targeting approach for "the duration of the liquidity trap episode," after which the Fed's objective would revert to a straight inflation target. Many believe a permanent price-level targeting approach, however, has a lot to recommend itself as an ongoing policy framework. The case rests on the presumption that, in the longer run, the goal is to limit uncertainty about the purchasing power of money, thereby reducing the risk premium associated with inflation volatility and lowering the real cost of borrowing. In principle, a price-level target is a stronger commitment to this goal than is an objective based on a target for the inflation rate.

"A target of 2% does not mean that inflation will be held at this rate constantly. That would be neither possible nor desirable. Interest rates would be changing all the time, and by large amounts, causing unnecessary uncertainty and volatility in the economy. Even then it would not be possible to keep inflation at 2% in each and every month. Instead, the MPC's [Monetary Policy Committee] aim is to set interest rates so that inflation can be brought back to target within a reasonable time period without creating undue instability in the economy."

That flexibility would inevitably be a part of any reasonable inflation-targeting approach, but it comes at a cost. Because the hypothetical objective does not preclude the rate of inflation running as high as 3 percent or as low as 1 percent for a string of several years, the acceptable variation in the price level grows as time expands:

Of course, a price level growing at 2 percent annually is exactly the same as a 2 percent inflation target if the target is hewed to too consistently. And that seems to be exactly the story of U.S. monetary policy over the past 15 years.

The following chart shows the growth of the PCE price index since 1995 (the blue line), shown with a hypothetical 2 percent price level target (the green line). The upper and lower red lines represent hypothetical tolerance limits (set to two standard deviations of the actual PCE price series over the period since 1995). 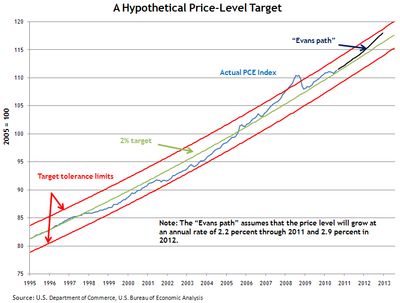 I have a couple of observations to make here:

One observation is that I chose the year 1995 to start the chart above because it roughly corresponds to that last major break in the U.S. inflation trend. This timing is also near the beginning of the period when the notion that Fed policymakers had in mind an inflation goal near 2 percent became conventional wisdom.

Although the upper and lower limits of the hypothetical price level target were, in a statistical sense, chosen to bracket most of the actual path of the price level, the bounds are quite tight: The price level has almost always been within 2 percentage points of the implicit 2 percent growth path. If you still wonder why inflation expectations have appeared so remarkably stable even in light of the impressive amount of monetary stimulus applied over the course of the past several years, part of the answer may well be in the chart above. In fact, if in January 1995 you bet that the PCE price level would be within 30 basis points of a target 2 percent price level path as of August 2010, congratulations. You're in the money.

A second observation is that President Evans presents his case for allowing some pick-up in the inflation rate by noting that the current price level would be low relative to a 2 percent target implemented as of the beginning of the past recession (December 2007). As the second chart makes clear, where the current price level is relative to a long-run path is clearly dependent on the starting point. If the initial conditions for the price-level target path were chosen well in the past, it would not necessarily be the case that the price level would be sitting well below the target.

To some, that observation might weaken the case for a permanent price-level targeting framework, as it would seem to remove some of the justification for a higher short-term inflation path that would assist in generating desirable short-term real rates when the zero nominal bound problem is in play. But as the chart above illustrates, a price-level target with reasonable tolerance bounds is quite capable of accommodating the sort of inflation outcomes that President Evans suggests will assist in promoting the recovery.

Some commentators have expressed concern that President Evans's proposal could encounter difficulties with credibility and communications as a shift is made from the price-level targeting period to a permanent phase that focuses on more familiar inflation rate objectives. Here's Jim Hamilton:

"Although communicating from the beginning what the exit strategy from the price targeting is supposed to be in specific quantitative terms might seem attractive, I worry it could run into a similar embarrassment as the infamous graph of the projected consequences of the economic stimulus package. Even in the best of times, the inflation rate will differ substantially from forecasts and policy objectives. And when the inevitable miss comes, one could imagine that the public would be less rather than more assured as a result of the Fed's specificity in communication."

Some potential benefits of simply sticking with a price-level target is that it (a) is clearly consistent with longstanding Federal Open Market Committee (FOMC) behavior (as attested to by the second chart above); (b) avoids a potentially confusing impression that the central bank is jumping from one framework to another to serve whatever is convenient at the moment; and (c) gives the public a clearer way to monitor if and when the long-term price-level objective is being compromised (as can be seen by comparing the implied tolerance bounds in the two charts above).

"I am also open to a move that I believe would strengthen the effect and compensate for potential risks of the policy action [another round of quantitative easing]—that move is the adoption of a more explicit inflation objective by the committee. I believe doing so might serve as a further step to ensure the anchoring of public expectations about long-term inflation and the response of the FOMC to adverse price developments. I consider a more explicit inflation target as something the public could easily understand, and I believe it would reduce uncertainty at a time when it is badly needed."

Making that "explicit inflation objective" a price-level target is an option some believe is worth considering.