The November jobs numbers were expected to be pretty bad, but the magnitude of the decline—the largest monthly drop in nonfarm payrolls since December 1974—surprised most. Moreover, as was noted in the last macroblog post, there is little to single out in the industry distribution of job change since the job losses were pretty much across the board.

The unemployment rate rose two-tenths of a percent to 6.7 percent, and the labor force participation rate declined from 66.1 percent to 65.8 percent. The decline in participation was concentrated in adult males and teenagers, perhaps reflecting limited job prospects in the current environment, while adult female participation was stable—suggesting the need for an additional wage earner in many households to help offset the dismal job market.

Here is a chart of cyclical patterns of labor force participation rates (LFPRs) for the last four recessions. I have added a Q4 estimate of the LFPR for 2008 (using the November number, which basically assumes that the decline from October to November will be repeated from November to December).

My take on comparing the movement of the LFPR since the beginning of this recession compared to the three most recent earlier recessions is that so far nothing looks out of line compared with historical patterns.

I think that a more appropriate question to ask is what is expected to happen to the overall labor force—this is what is in the denominator of the unemployment rate. The following chart plots the labor force indexed to the peak of the business cycle. 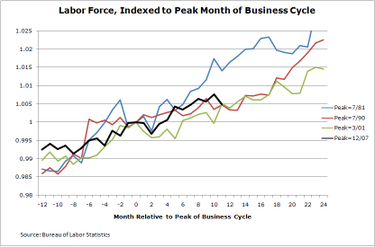 As you can see in this chart, the labor force continues to grow throughout the recessions, and the current labor force growth doesn't look at all atypical.

One hypothetical question to ask is how many lost jobs would be implied by a rise in the "official" unemployment rate from its November level of 6.7 percent to 7.5 percent (roughly the November Blue Chip consensus forecast of the unemployment rate for the middle of 2009). With the assumption that the labor force stays the same (flows only from employed to unemployed but none out of the labor market), this implies an additional loss of 1.2 million lost jobs from now. At November's rate of a half-million jobs lost a month, reaching this number won't take long.

But if instead we project the current rate of labor force growth out to June 2009, an unemployment rate of 7.5 percent would imply a total of 11,653,000 unemployed people. This is 1.3 million more people unemployed than reported for November—again, at the current rate of job loss, this is easily attainable by June (and some suggest we will lose twice this number of jobs by June). But the point is, accounting for ongoing labor force growth, a 7.5 percent unemployment rate means only a slightly greater amount of job loss than when labor force growth is not taken into account.

There is some debate about what measure of unemployment we should focus on in measuring the degree of misery in the labor market. However, even if one adds back into the unemployment numbers (and, necessarily, back into the labor force count) those who have dropped out of the labor force because they were discouraged, the conclusion about the relative roles of labor supply decisions and actual job losses play in the construction of the unemployment rate does not change—job losses always dominate.